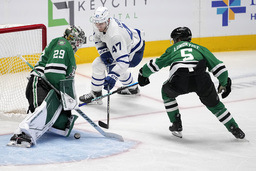 The incident took place early in the third period Thursday night in Toronto's 5-0 home victory. Engvall was given a game misconduct after striking Durzi in the back of the head as the two players got tangled up near cenrer ice.

The suspension will cost Engvall $12,162. The 6-foot-5 Swede has four goals and three assists in 27 games this season.