Penguins plot a way forward as Letang recovers from stroke 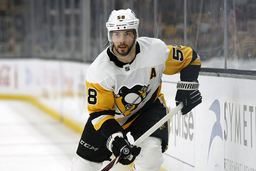 PITTSBURGH (AP) Kris Letang returned to the ice on Thursday, just three days after suffering the second stroke of his career.

The "twirl" the longtime Pittsburgh Penguins defenseman took at the club's practice facility was approved by team doctors, a spin designed to help Letang's mental health and nothing else. While the 35-year-old remains upbeat, it remains far too early to put a timeline on when his familiar No. 58 will return to the lineup.

Though Pittsburgh general manager Ron Hextall indicated this stroke isn't as severe as the one Letang endured in 2014 - when a hole in the wall of his heart led to a stroke that forced him to miss two months - the six-time All-Star is continuing to undergo tests.

There are no plans for Letang to participate in any sort of hockey-specific drills anytime soon, with coach Mike Sullivan stressing the club will "err on the side of caution" when it comes to whatever rehab Letang might need.

While Letang - one of the most well-conditioned players in the NHL - essentially went through the motions by himself, his teammates were 30 minutes south at PPG Paints Arena getting ready for a visit from Vegas and trying to plot a way forward without one of the franchise cornerstones, at least in the short term.

Letang made it a point to help break the news to the rest of the Penguins following a 3-2 overtime loss to Carolina on Tuesday. Pittsburgh scratched Letang from the lineup with an unspecified illness and he spent a portion of the game watching from the press box next to Hextall.

Afterward, Letang informed a somber locker room about his condition, a revelation that came as a shock even as he did his best to reassure those around him that he was and is OK.

"It's very serious health stuff," defenseman Chad Ruhwedel said. "You hear about strokes and it's never really good so we're just glad to see he's doing well and everything is good with him."

Sullivan understands it would be practically impossible for any of the other defensemen on the roster to replicate what Letang brings to the ice, so he's not going to ask any one player to try. There are few players at the position in the NHL who have Letang's mix of speed, skill and almost bottomless energy.

The highest-scoring defenseman in franchise history is averaging a team-best 23:54 of ice time and has long been a fixture on the power play and in just about every crucial late-game situation.

"I just think Tanger is not an easy guy to replace," Sullivan said. "I don't think from a tactical standpoint things change drastically. It's just personnel based. But as you know, personnel can mean a lot in those types of situations."

It's more than that, however. This isn't a routine injury. There's an emotional component and an unknown element to Letang's status even as the Penguins insist they don't believe his condition is career-threatening.

Letang's on-ice presence is just one aspect of his importance to a team that has never missed the playoffs since he made his debut in 2007. He's become a mentor to younger teammates like 23-year-old defenseman Pierre-Olivier Joseph, who like Letang is French-Canadian and who, like Letang, plays with a graceful fluidity.

Joseph, who declined to get into specifics about Letang's message to the team on Tuesday night, believes the best thing the Penguins can do during Letang's absence is attack the game with the same passion he's shown for 17 seasons and counting.

"The way he plays for the team every single night and the way he puts his heart and soul into the game on the ice, it's the least we can do is have our thoughts of him whenever we get on the ice," Joseph said.

Sullivan shuffled the lineup on Tuesday, elevating veteran Jeff Petry and Brian Dumoulin to the top defensive pair. Petry possesses a skillset that's not too far removed from Letang's, but it's also his first year in Pittsburgh. Asking him to provide the leadership that's innate to Letang is unfair. It's one of the reasons Sullivan is insistent that it will take a group effort to fill in for a singular presence.

"We have some diversity on our blue line right now," Sullivan said. "We feel like we have guys capable of stepping in and getting the job done for us and we're going to try and do that."