NHL taking both awards show, draft to Nashville in June 2023 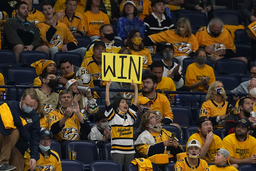 NASHVILLE, Tenn. (AP) The NHL will be holding its awards and draft in Music City in June 2023, the first time the league has held both in the same city since 2006.

"We are thrilled to bring two of our marquee events - the 2023 NHL awards and the 2023 NHL draft - to Nashville, a special city that certainly knows how to throw a great party," NHL Commissioner Gary Bettman said in a news release Thursday.

This will mark the 20th anniversary of the first time Nashville hosted the NHL draft. Nashville and the Predators also hosted the 2016 NHL All-Star Weekend, the 2017 Stanley Cup Final and an outdoor game in February at Nissan Stadium.

"The city, the Predators organization and the country music community have overwhelmed the NHL with their welcome and support every time Nashville has hosted a league event," Bettman said. "We cannot wait to return next June to celebrate the stars of our game and introduce the next generation of NHL players."

Vancouver hosted both events in 2006. The 2023 NHL awards will be held June 26 for the first time in Nashville. The NHL will hand out its regular-season awards that night, then hold the draft at Bridgestone Arena on June 28 and 29 hosted by the Predators.

"It's been more than 15 years since these two events were hosted in the same city in the same year," said Sean Henry, president and CEO of the Predators. "Next June, we are penciling that week with SMASHVILLE as the center of the hockey world. It will let hockey fans worldwide celebrate the best in our game and welcome its future stars right here in the heart of Music City."