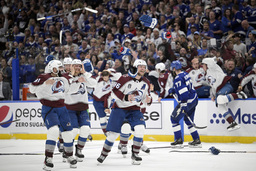 TAMPA, Fla. (AP) In a copycat league known for following the Stanley Cup champions, Colorado Avalanche captain Gabriel Landeskog paused when asked what other teams could do to emulate their success.

With a grin, Landeskog replied: "Find a Cale Makar somewhere."

Playoff MVP Cale Makar was a big part of Colorado's title run from the blue line, but more than anything else the Avalanche showed the value of speed and skill in the NHL as hockey moves dramatically to prioritize those elements in the name of scoring. The Avalanche and the two-time defending champion Tampa Bay Lightning, who fell two wins short of a threepeat, also provided evidence that it's worth taking risks at the trade deadline for the right fits.

Colorado traded its top two prospects and a couple of second-round picks to acquire forward Artturi Lehkonen and defenseman Josh Manson, along with trades for Andrew Cogliano and Nico Sturm that helped the Avalanche win their first championship since 2001. Captain Gabriel Landeskog had plenty of praise for general manager Joe Sakic and assistant Chris MacFarland in the moments after winning the Cup.

"Joe and C-Mac did a great job of picking up some pieces along the way that really, really made us hard to play against," Landeskog said. "Look at Cogs, look at Homer (Darren Helm), look at Sturm -- look at all these guys, all these pieces that they just want to win so bad they want to do whatever it takes. It just adds up to just a hard team to play against."

Perhaps the best lesson from this postseason is what a team that's hard to play against looks like.

The fast-moving Avalanche roared through the Western Conference playoffs that for years was known for big, heavy teams that pushed each other around. They needed the bulk and grit provided by Manson, center Nazem Kadri and others to endure the Lightning.

Thanks to sixth-year coach Jared Bednar, who instilled a focus in his team after several playoff disappointments, Colorado was also mentally ready for Tampa Bay's push -- and much like the Lightning proved patience can pay off for organizations willing to stand behind their most important people even amid trying times.

This Stanley Cup Final finished that point, after the Lightning staved off elimination to send the series back to Tampa. Even after falling behind in Game 6, the Avalanche bounced back to be champions.

"They came at us, we collected ourselves and we were poised," owner Stan Kroenke said. "This team will beat you if you're not poised."

And the Lightning may do this to more teams next year. While the Avalanche are facing a cap crunch with Manson, Kadri and goaltender Darcy Kuemper up for free agency, Tampa Bay for the first time in a few years has some room to maneuver without breaking up its core.

Goal-scoring winger Ondrej Palat and defenseman Jan Rutta are free agents, along with trade deadline acquisition Nick Paul, but Lightning GM Julien BriseBois has worked magic before to get under the cap, and with it going up $1 million next season, there's some breathing room.

Don't bet against the Lightning reaching a fourth consecutive final and going for a third championship in four years. They are 10-1 favorites, according to FanDuel Sportsbook, right behind Colorado (5-1) and Toronto (9-1).

"Who says we're done, right?" captain Steven Stamkos said. "This core is here and we've battled and been through everything you can think of and for the most part we've found a way to come out on top."

Except this year, when the Avalanche's depth and talent was simply too much to overcome. That was a product of Sakic adding three players at the deadline, which came in handy when injuries threatened to derail the organization's latest attempt to get over the hump with the core led by Landeskog, Nathan MacKinnon, Mikko Rantanen and, of course, Makar.

"We found a way," Rantanen said.