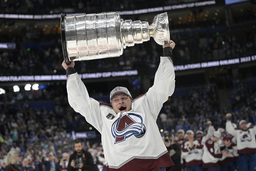 Bettman recently tested positive and was unable to produce enough negative results to get back to the series in time. That left Daly to give the traditional end-of-season speech and shake Landeskog's hand before presenting the trophy.

It's the first time someone other than Bettman handed out the Cup since he took over in 1993. A league spokesman said Bettman was resting at home and feeling better.

After Landeskog took his lap, the Cup quickly went to some of Colorado's older players and first-time champions, including Erik Johnson, Jack Johnson and Andrew Cogliano.

"The older guys that are probably nearing the end and they get a chance to lift the Cup for the first time, you can just see the excitement," general manager Joe Sakic said.

Erik Johnson, the Avalanche's longest-tenured player after arriving in a trade from St. Louis in 2011, considered retiring last year. After thinking better of it, he got the Cup first and remarked it's "heavier thank you think."

"It was like I was watching a video game or something like that, Johnson said. "It was amazing. Gabe was telling me the last couple years, `When we win it, you're getting it first.' If that doesn't give you motivation to get it done, nothing else does. Just a super humbling, gratifying feeling, it's amazing."

Jack Johnson and Cogliano were more recent additions, but the feeling was the same. Cogliano got to hoist the Cup for the first time at age 35.

Cogliano, one of Sakic's trade deadline pickups who helped get Colorado over the top, doubted throughout his career he'd ever reach this point. The trade from Anaheim made it all happen.

"You don't know," Cogliano said. "At the deadline there, I was fortunate to be in a position where they needed someone to come in and play a role and I came in and I did that. I fit in right away with the guys. I was friends with ( Nathan MacKinnon ) and friends with guys on the team already, and it was just a seamless fit, to be honest, and it worked out perfectly."

Some Avalanche players like Nazem Kadri had no trouble lifting the Stanley Cup despite battered and bruised hands from various playoff injuries.

Kadri was playing with multiple broken bones in his right thumb after he was shoved into the boards by Edmonton's Evander Kane during the last round on a play that led to a one-game suspension.

Andre Burakovsky, one of just two Colorado players who had won te Cup before along with veteran Darren Helm, missed Game 6 after taking a puck to his right hand earlier in the series.

Injuries sidelined key players on each team during the final, but Tampa Bay winger Pat Maroon suggested people would be amazed how much of a toll they took on the Lightning during their 23-game postseason run.

Coach Jon Cooper said he's not sure the team will ever make that public, though he acknowledged it would be an extensive report.

"We'd have had half the minor league team playing if it had been the regular season," Cooper said.

Forward Brayden Point missed of 14 of Tampa Bay's last 16 games after injuring his right leg during Game 7 of the Lightning's first-round victory over Toronto. Forwards Nikita Kucherov and Anthony Cirelli and defenseman Erik Cernak all returned from injuries that knocked them out of portions of games during the series.

Lightning winger Corey Perry became the first player since 1970 to lose in the Stanley Cup Final three years in a row. He's the first in NHL history to do it with three different teams after losing to Tampa Bay each of the previous two seasons, first with the Dallas Stars and then the Montreal Canadiens.

"Corey Perry, it is no coincidence he goes to finals," Cooper said. "The kid's a winner."