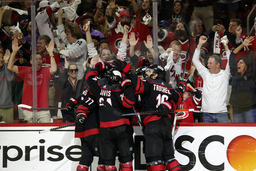 By VIN A. CHERWOO

The New York Rangers return home knowing they need a win at home to keep their postseason going. The Carolina Hurricanes are still looking for their first road victory in these playoffs.

After Carolina won 3-1 on Thursday night to take a 3-2 series lead, the Rangers will be looking to force a deciding game in the second-round series when they host the Hurricanes in Game 6 on Saturday night (8 p.m. EDT, ESPN).

"We lost a game and we didn't play as well as we could have, so I was disappointed," Rangers coach Gerard Gallant said Friday. "That's playoffs, that's the way she goes. We'll be ready to go tomorrow night and that's what we're looking forward to.

"Just worry about tomorrow and take care of business."

A must-win game is nothing new for these Rangers. They trailed 3-1 against Pittsburgh in the first round, then won three straight - becoming the first team in NHL history to rally from a deficit in three consecutive elimination games - to advance.

"We've been in this position before," New York forward Ryan Strome said. "I like our chances on home ice. ... We're familiar with the situation. Got a chance at home to push it to (Game) 7 and that's all we're worried about now."

The Rangers also trailed in this series after losing the first two games in Carolina. They returned home and won Games 3 and 4 to even the series. Now, they have to win at home again to tie the series one more time.

"The feel in that dressing room is super confident at all times and I think the first series helped a little bit," Strome said. "And having to win Games 3 and 4 (in this series), those are pretty must-win games and we did a pretty good job. We can draw from those experiences."

And what those experiences have taught the Rangers is to have a singular focus on the task at hand, and not worry about the series or deficits.

"Well, your backs are against the wall," Gallant said. "You go out and you play your game. You know if you lose this game there's no tomorrow. We did that real well last series, hopefully we can do it again tomorrow. I don't think we change anything strategy-wise. We just go out there and play our game."

Forward Chris Kreider agreed, adding: "We've got to win one game. ... Lot of things we could take from (Game 5 loss) and do a better job of. Learn from that and win one game. Win the first shift, win the first period and go from there."

The Hurricanes are also trying to win one game - on the road, for the first time in the postseason. After their latest victory, they improved to 7-0 at home, but are 0-5 on the road.

Carolina coach Rod Brind'Amour isn't concerned by the team's lack of road wins, though he acknowledges people talk a lot about it.

"That's a non-issue," he said. "It's all I hear about endlessly. We haven't played poorly on the road. Our game's been fine. There's a couple of things that have gone squirrelly. ... We're playing good teams. That's how it goes."

The Hurricanes regained the series lead with a strong defensive effort in Game 5, limiting the Rangers to 17 shots on goal - including five in each of the first two periods.

"Does it transfer over, obviously we hope so," Brind'Amour said. "I don't usually take a lot of stock one game into the next, good or bad. It's always about the next game and it takes a life of it's own but definitely the way we want to do it."

If the Hurricanes keep up their trend this postseason, the deciding Game 7 would be Monday night at home. But that's not something they want to think about right now.

"We're going to give it our best," Brind'Amour said. "We're going to try to win (Saturday). We do every night. Nothing really changes. Obviously, we don't want to come back (home) and have another game. We're going to do everything we can to win tomorrow night."