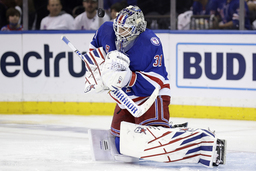 "He has that grin like he's loving every aspect of it," retired goaltender Martin Biron said. "He's got some cocky confidence to him."

That confidence has made Shesterkin the face of the Rangers franchise and successor to Henrik Lundqvist as the new king of New York.

The 26-year-old Russian goaltender now hears fans yelling, "I-gor! I-gor!" in the same cadence of "Hen-rik! Hen-rik!" that reverberated off the walls of Madison Square Garden for more than a decade. He knows he is charged with trying to win the Original Six organization's first Stanley Cup title since 1994.

The Rangers are down 3-2 and face a must-win Game 6 at home Saturday night against Carolina in the second round.

"I feel no pressure as a player," Shesterkin said recently through an interpreter. "I do understand the gravity of the situation. This city, this team definitely deserve a Cup and we're giving our best to try to make that happen."

Shesterkin has the talent and the personality to handle being at the center of the maelstrom that is tending goal for the Rangers. Being a starting goaltender in any NHL market comes with a certain spotlight, but it shines brighter in New York City, especially given there has only been one hockey championship parade down the "Canyon of Heroes" in more than 80 years.

"He wants that mantle," said Mike Richter, who was the goalie in 1994 when the Rangers won the Cup. "You can't back into New York or any starting goaltending position in the NHL and decide that you don't want to play a pivotal role in the success or failure of the team."

Arguably no one played more of a pivotal role in his team's success this season than Shesterkin, who led the league with a 2.07 goals-against average and .935 save percentage to help the Rangers make the traditional 16-team playoffs for the first time since 2017.

He is a Hart Trophy finalist for NHL MVP, the first goalie to finish top three in voting since Sergei Bobrovsky in 2017 and just the second since Lundqvist a decade ago.

Lundqvist, who was bought out by the Rangers in 2020 in part to clear a path for Shesterkin, knew right away his heir apparent was right for the job.

"He worked hard - great attitude from Day One - and you could tell his skill level was there," said Lundqvist, now an analyst for MSG Network. "The success we're seeing, it's not a surprise at all."

Lundqvist and Stephen Valiquette noted the work of longtime Rangers goaltending coach Benoit Allaire, who has been known to write "Become a master" on the ice in marker before practice.

"Allaire used to say to us: `Keep the bubble nice and tight. Don't let it get too big, or it's going to burst,'" said Valiquette, who played 41 of his 48 NHL games for the Rangers and has gone on to become an MSG analyst and run his own analytics company. "Allaire is so good at getting us to buy into the process and really focus on what's important, so you're not thinking about the result."

After showing remarkable consistency most of the season and stopping 118 of 124 shots in his first two playoff starts, Shesterkin struggled midway through the first round against Pittsburgh. He was pulled from Game 3 after allowing four goals on 15 shots and gave up six more to lose Game 4, putting the Rangers down 3-1 in the series.

While plenty of buzz was swirling about the possibility of backup Alexandar Georgiev starting Game 5 to give Shesterkin a breather, coach Gerard Gallant never wavered. Shesterkin found his game to get the results the Rangers needed to come back and knock off the Penguins.

Then, when New York trailed Carolina 2-0 in the second round, Shesterkin was otherworldly in turning aside 73 of 75 Hurricanes shots to even the series.

"All he did was put his equipment on and go to work," Richter said. "That showed some real focus and the ability to block out anything that's not particularly helpful. That's a real mature response by him and the whole team and it bodes well for the future."

While the Rangers rebuild was supposed to be a longer-term project, the future is now thanks in large part to Shesterkin, who has shown glimpses of relishing the situation like Lundqvist did. The veteran Swede, who was forced to give up hopes of playing after tests revealed a heart condition, knows exactly what it takes to fill that role. He sees those qualities in Shesterkin.

"He lives his life, he's focused on the game, but then away from the game he can focus on friends, family and that's healthy to your game not to get carried away in this city," Lundqvist said. "There's a lot of people that want a piece of you and do this and do that and it all comes down to your personality, too: what you want to do. But in the end, it comes down to be ready when you come to the rink. It seems like he lives in his little bubble, and I think that helps in the long run."

Through the long lineage of Rangers goalies from 1940 Cup-winner Dave Kerr to Eddie Giacomin, Richter and Lundqvist, not all of them were creatures of the attention that comes with playing in New York. Shesterkin, however, has shown he can play the part.

"He loves it as much as Lundqvist did," Biron said. "He embraces it, and gets energy off of it. To me, he fits the mold that Rangers fans have been able to go from Lundqvist to Shesterkin and kind of followed it perfectly."