Blues at home with confidence for Game 6 vs. Avalanche 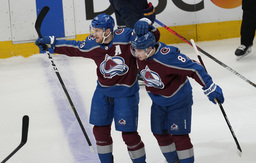 Cale Makar boarded a plane bound for St. Louis, leaving behind one thing he doesn't fully believe travels from game to game or city to city - momentum.

The Colorado Avalanche hope the young defenseman is right after squandering a three-goal lead in an overtime loss. The St. Louis Blues are eager to prove that feeling false.

"We're still in a great spot right now," said Makar, whose team leads 3-2 in a second-round series that shifts to St. Louis for Game 6 on Friday night (8 pm. ET, TNT). "So that's all that's in my head. ... This (loss) is in the past and momentum doesn't carry from game to game."

The Blues were 56 seconds away from the curtain closing on their season. Now, they're heading home filled with confidence after rallying not once but twice in Game 5 before fourth-line center Tyler Bozak scored the overtime winner on a shot through traffic.

It was just the fifth time the Blues have rallied from three goals down to win in the postseason and the first time since 1998.

"We were harder on pucks. We were winning battles. We were forechecking well. We were hemming them in the O-zone," explained Robert Thomas, who had two goals, including the tying one with 56 seconds left in regulation. "We know what works and we know how we can have a chance to win every night."

The Avalanche took both games in St. Louis to run its road record to 4-0 in these playoffs. The team does have the benefit of a safety net with Game 7 in Denver on Sunday if necessary. But it's a safety net they would prefer not to use.

"Our belief is the only team that can beat us is ourselves," said Avalanche coach Jared Bednar, whose team is looking to advance to the Western Conference final for the first time since 2002. "True or not, I like that attitude. ... If you sulk or you live in the past or you're not staying in the moment, then you're finished."

The Blues are riding a wave of confidence after becoming the first team to score a pair of game-tying goals in the final five minutes of regulation when facing elimination, according to NHL Stats. That little piece of history made for a pleasant plane trip home for the Blues.

Coach Craig Berube spent the time in the air breaking down game film. What he saw was a team doing the little things that added up to a comeback for the ages.

"It's important you do the little things," Berube said. "A lot of times it boils down to winning and losing."

Colorado appeared well on its way to the next round after Nathan MacKinnon scored his third goal of the game in grand fashion - an end-to-end skating masterpiece, culminating with a nifty move past a defenseman and a niftier shot with 2:46 left. It energized the crowd and gave the Avalanche a 4-3 lead. But Thomas rescued the Blues with his late tally and Bozak then came through in OT.

"I personally felt bad after the game because (MacKinnon) put us on his back and he should have won us that game and unfortunately we couldn't get it," Makar said. "I felt like we let him down, just as an individual and how well he played. That was playoff Nate right there. We don't expect anything less."

The Blues vowed to cut down on all that room for MacKinnon to maneuver as he recorded Colorado's second straight hat trick ( Nazem Kadri turned in the other with his Game 4 performance ).

"Got to be tighter to him," Berube said of MacKinnon, who scored his first three goals of the series. "Try to get the puck out of his hands and give it to somebody else. Get on him. Take time and space away from him."

The task for the Blues remains simple: Keep up their resilient ways.

"We didn't want the season to be over and fought hard, got some big goals late," Bozak said. "It was awesome. We're excited for our next game. ... Obviously, we want to use this as momentum."