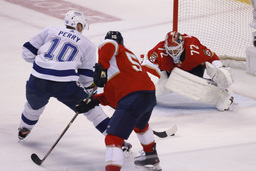 Sometimes, your top players aren't at their peak and you still win.

With a little help from his friends, Makar and the Avalanche lead St. Louis 1-0 in their second-round series. With a combined effort, the the two-time defending Stanley Cup champion Lightning took a 1-0 advantage in their series with Florida.

"It's important for everyone to step up at this time of the year," said Avalanche forward Darren Helm, whose team hosts the Blues in Game 2 on Thursday night (9:30 p.m. EDT, TNT). "With any game anybody can be the hero."

In Game 1 for the Avalanche, Josh Manson answered the call with his first career playoff goal arriving in overtime during a 3-2 win.

For the Lightning, it's hard to pick one. Corey Perry and Kucherov each had a goal and an assist, while Vasilevskiy looked very much like the Conn Smythe Award winner he was last year, stopping 33 of 34 shots as the Panthers beat Florida, 4-1.

"They force you to do the little things right the whole game," Panthers interim coach Andrew Brunette said. "They're patient enough, smart enough, that they wait you out a little bit. A couple poor decisions, not even catastrophic decisions, but just little decisions that they make you pay."

It's not that Makar played poorly in Game 1. He didn't. It's just that by his elevated standards - three goals and seven assists in a first-round sweep of Nashville - make a pointless night feel almost like an off night.

"We get spoiled with Cale a little bit," Avalanche coach Jared Bednar said. "We expect him to be exceptional, a huge difference-maker, make all these dynamic plays every night."

He doesn't always need to with Nathan MacKinnon, captain Gabriel Landeskog and the rest of the speedy ensemble behind him. The Blues plan to counter that speed with a bump here or there.

"You've got to have contact on them. If you don't, they're going to skate right through you," Blues coach Craig Berube said. "That's the way they play. They don't rest, they just go. It's not running around and running out of position, it's just contact when it's there. Bumping guys - that gives guys a little bit more time to get a puck, or make a play. There's got to be contact all the time."

A friendly reminder that resonates from Denver all the way to Sunrise, Florida: Expect a brick wall in goal. It's that time of year when goaltenders step it up another level.

Vasilevskiy once again confounded the Panthers. Just like he did in Game 6 a season ago, when he made 29 saves in posting a shutout as the Lightning eliminated the Panthers.

"He's the best goalie in the world, we think, and he's proving it right now," Lightning captain Steven Stamkos said. "We hope that continues."

Blues goaltender Jordan Binnington was terrific, making 51 saves under near-constant pressure before surrendering Manson's winner. It's the fifth 50 or more save performance in the Blues' playoff history.

"We can expect their goalie to come up big," Bednar said. "We can expect times where it's not going our way. To be resilient is the key, and be mentally strong."

Bednar frequently hears the chatter on the bench. He can sense when his team grows frustrated. That wasn't the case in a game where they outshot the Blues 54-25, including 13-0 in overtime.

"It was all positive and everyone was saying and doing the right things," Bednar said.

The Blues have now dropped eight straight playoff games to Colorado. They were swept by the Avalanche in the first round a season ago.

"By all means we don't think we're out of the series," Blues forward Brayden Schenn said. "We didn't even play good last night. Our goalie held us in it. We feel we have a whole lot better to give. You'll see that in Game 2."

It's not difficult to find an area the Panthers need to fix - the power play. The Panthers are now 0 for 21 so far in the playoffs after coming up empty three times with the man advantage in Game 1.