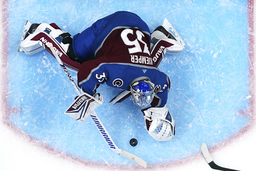 DENVER (AP) The swelling around Colorado Avalanche goalie Darcy Kuemper's right eye has subsided a week after catching a stick blade through his mask. '

"I can see now," he said with a laugh Sunday after practice.

This remains clear to him, too: The incident could've been far more serious.

"I got pretty lucky," Kuemper said, "that it wasn't worse."

The stick of Nashville center Ryan Johansen slipped through the protective bars on Kuemper's mask and caught him around the eyelid during Game 3 on May 7. It's the second time in his NHL career an inadvertent stick blade has poked Kuemper through his mask.

"Super strange," said Kuemper, who will be back in net when the Avalanche begin their second-round series against the St. Louis Blues. "First time, definitely thought it was one in a million. Twice is two in a million."

Still, he has no plans to change goalie masks.

"The stick was the right shape, unfortunately," explained Kuemper, who also was injured while with Arizona in 2019, when a stick accidentally struck him after a backhanded goal. "Just a scary situation. ... It just happened so quickly and, obviously, it's pretty scary when your eyes are involved."

The play took place late in the first period of the Avs' 7-3 win. Replays showed Johansen's stick extended through Kuemper's mask while fighting for position near the net with Avalanche forward Nathan MacKinnon. Kuemper fell back before skating toward the bench. Halfway there, he dropped to the ice.

"I was skating off but kind of blind in my direction," Kuemper said. "The ref was yelling at me to stay down. That's why I went back down."

Kuemper then headed to the locker room covering his right eye.

"I saw the doctor right away and he said it was more eyelid than eye," the 32-year-old Kuemper explained. "So that was reassuring."

Johansen said soon after he was "sick to his stomach" at seeing Kuemper's injury. Kuemper sat out Game 4 - Pavel Francouz filled in - as the Avalanche closed out the series in a sweep.

And while he hasn't spoken to Johansen, Kuemper said it was a "complete accident and really bad luck."

"He's not even looking my direction," Kuemper added.

Defenseman Erik Johnson recalled not really knowing what was going on.

"I thought he was selling it to try to get a penalty. Then I saw his eye ..." Johnson said. "He was not selling it. It's crazy.

"Luckily it wasn't on his eye - just on his eyelid. So he's pretty lucky."

The weeklong layoff has given Kuemper more time to heal and more time for the swelling to go down. The incident won't be on his mind, though.

"Once the game starts, you're in the zone and you're playing," said Kuemper who had a 1.63 goals-against average in the Nashville series as he stopped 57 of 61 shots. "We're really looking forward to getting started again."

At practice, his teammates haven't been holding back. They've been getting Kuemper ready for a Blues team that featured eight forwards with 50 or more points during the regular season.