Three 7s: NHL has Game 7 tripleheader on tap for Saturday 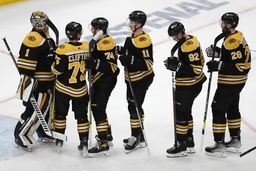 BOSTON (AP) The players dream of it. The fans look forward to it.

And on Saturday, there will be three of them.

The NHL is wrapping up the first round of the playoffs with a rare treat: back-to-back-to-back seventh games that will go a long way toward shaping the conference semifinals.

The Carolina Hurricanes will host Boston in a matinee, followed by the two-time defending champion Lightning at Toronto and the Kings in Edmonton. It's the first Game 7 tripleheader since 2014.

"It's going to be juicy," Oilers forward Evander Kane said after scoring twice in a 4-2 win that forced Game 7 against the Kings.

There could be more Game 7s on Sunday, with three other series at 3-2 heading into Friday night. The most Game 7s ever in a single round was six in 1992.

"It's what's at stake, is the biggest thing. Everything's on the line," Bruins captain Patrice Bergeron said Friday. "It brings back memories of why you play the game."

The Bruins and Hurricanes are loaded with Game 7 experience - everyplace but in goal.

Boston rookie Jeremy Swayman is expected to be back in net on Saturday. He made his first career postseason start in Game 3, after Linus Ullmark gave up eight goals in the first two games.

"It's a dream come true. I can't wait," the 23-year-old Alaska native said. "It's no bigger or smaller than any game I've played before. I want to make sure I'm coming with that mentality. We want to win. We're going to do everything we can and I can't wait to get on the ice."

Carolina's Antti Raanta had never started a postseason game before this year.

Ten players remain from the Boston roster that beat Toronto in seven games in the first round of the 2019 playoffs (and lost in seven to the St. Louis Blues in the Stanley Cup Final that year). A victory would be the franchise's 16th Game 7 win - an NHL record the team currently shares with Montreal.

"I've played in a lot of them," said Bergeron, who is 6-7 in winner-take-all games in his career. "The ones that sting the most are the not-so-good ones. ... You try to see the glass half full and reminisce on the good ones, but it makes you hungrier when you think about the other ones as well."

For Carolina, it would be a sixth straight victory in a seventh game.

Raanta, who arrived this year as part of the Hurricanes' overhaul of the goaltender position, has played well in the lead role with No. 1 goaltender Frederik Andersen sidelined by a lower-body injury since mid-April. Raanta has started five games, leaving one early due to injury, and won two with a 2.46 goals-against average and .926 save percentage.

Carolina won the first two games before Boston leveled the series. Carolina won Game 5 to retake momentum but was unable to eliminate the Bruins on Thursday night.

"Everyone's bitter and mad and frustrated," Carolina coach Rod Brind'Amour said. "That was not the kind of game we expected to play. Come tomorrow it's all old news and it's what's in front of you that matters."

The series is the second in playoff history in which the home team won each of the first six games by multiple goals, according to ESPN Stats & Info. The other was the 1955 Cup finals, with Detroit beating Montreal by two goals at home in Game 7.

The Lightning won 4-3 in overtime in Game 6 to keep their hopes of a three-peat alive, but it's another streak on the minds of the Maple Leafs as they host their winner-take-all series finale.

Toronto has lost nine straight potential clinchers, including Thursday night against Tampa Bay and three in a row after taking a 3-1 series lead against Montreal last year.

"We had plenty of opportunities to finish the game and finish the series," Toronto coach Sheldon Keefe said. "It didn't go our way, but (there's) lots of belief in our group, and we're excited to play Game 7 on home ice in front of our fans."

The Original Six franchise, which is going on 55 years since it last put its name on the Stanley Cup, hasn't won a playoff series since 2004. Included in that span are some colossal collapses, including a 2013 Game 7 loss to Boston in which the Leafs blew a 4-1 lead with 11 minutes left in regulation.

"We worked hard all year to earn home ice, and we've got a great opportunity going home in front of our fans to try to close this thing out," he said. "Look forward to the opportunity. It's what the game's all about."

The Lightning are trying to become the first team to capture three consecutive Stanley Cup titles since the New York Islanders won four in a row from 1980-83. That quest could end early.

"It all comes down to one game," Lightning center Anthony Cirelli said. "Those are fun ones to play in."

Kane kicked off the Game 7 hype by holding up seven fingers after his empty-net clincher on Thursday night. But he also could have been referring to his seven playoff goals this year, tied with Minnesota's Kirill Kaprizov and Pittsburgh's Jake Guentzel for the league lead.

"I didn't even realize that," he said with a laugh.

Kane is the seventh Edmonton player to score at least seven times in a series and the first since Esa Tikkanen in 1991. He trails only Jari Kurri and Mark Messier for the most in a series in franchise history.

"The older guys haven't been there in a few years, and we have a few guys that haven't experienced this at all," Kings forward Anze Kopitar said. "But if you told us that we've got to win one game to advance, we'd certainly take the opportunity. So it's not all that bad."