Rittich will start Game 1 in goal for Predators against Avs 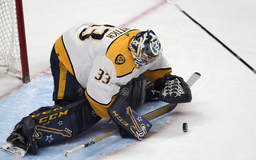 Saros is out for at least the first two games of the series after leaving a contest last Tuesday favoring his left leg. Saros won 38 games for the Predators this season.

The 29-year-old Rittich got the start over Connor Ingram, who's appeared in just three NHL games. Rittich was the winner when the Predators beat the Avalanche in a shootout last week at Ball Arena. He went 6-3-4 this season for Nashville.

"He's experienced. He's played more games in the league," Hynes said. "We trust him and believe in him."

This will be the second career playoff appearance for Rittich, who entered for Calgary during Game 6 of a first-round series against Dallas in 2020.

Colorado forward Nazem Kadri remains a game-time decision as he deals with an illness.