Predators without Saros for 1st 2 games of series with Avs 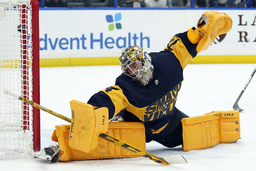 DENVER (AP) All-Star goaltender Juuse Saros of Nashville will miss the first two games of the first-round series with Colorado due to a left leg injury.

Saros was ruled out Monday by Predators coach John Hynes, who said a decision hasn't been made between backups David Rittich and Connor Ingram. Game 1 is Tuesday night in Denver.

Saros was favoring his leg when he left a game last Tuesday against Calgary with 6:32 remaining. He was replaced by Rittich in a 5-4 overtime loss.

The loss of Saros is a blow to the Predators as they face the No. 1-seeded Avalanche, who boast one of the top-scoring offenses in the league.

Saros's 38 wins were the most in a season by a Predators goaltender not named Pekka Rinne, who has the team's three highest victory totals.

"He (Saros) has been a real strong backbone of our team," Hynes said. "He's one of the elite goalies in the league and gives us he gives you a chance to win every night.

"When you look at the top goalies in the league, when there are breakdowns in the game, which there are - it's hard to play a perfect game - they can make the routine save regularly. But they can also make the big-time save when there's a major breakdown."

The Avalanche will see the return of captain Gabriel Landeskog, who has been sidelined since undergoing knee surgery on March 14. The Avs were not thinking about which goalie might be in net.

"We're playing the Nashville Predators," Landeskog said. "We're not playing Saros or Rittich. It doesn't matter. Our approach is still the same."

Rittich led the Predators to a shootout win over the Avalanche last Thursday. Ingram was 30-17-7 with a 2.70 goals-against average for Milwaukee of the American Hockey League.

Ingram has only played in three NHL games.