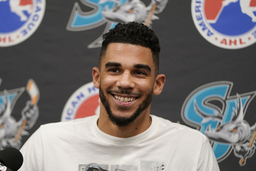 SAN JOSE, Calif. (AP) Evander Kane reported for his first day in the minors focused on doing what it will take to get back to the NHL instead of rehashing the allegations from the offseason that led to one of the league's top forwards being relegated to the AHL.

Kane's 21-game suspension for submitting a fake COVID-19 vaccination card has ended and he is trying to work his way back into shape with the San Jose Barracuda and prove himself worthy of another chance in the NHL.

"I came in today, the same person, same teammate, same player that I was and everything went great," Kane said Tuesday. "I think there's been a lot of misinformation that's been said. But I can only control how I act and what I do here and that's what I'm doing."

Kane faced a litany of allegations this offseason which led to this stint in the minors, with the most serious in terms of hockey coming when his estranged wife accused him of betting on hockey games, including "throwing games to win money."

The league launched an investigation into those charges and found no evidence they were true.

"It was definitely surprising to see," he said. "But I genuinely was not worried one bit about it because they were obviously false. There were certain motives behind that that didn't make sense at the time. But it wasn't something I lost any sleep over. It was definitely not great to be associated with that at the time. But the league investigated me heavily and interviewed a bunch of different people."

Kane was cleared the day before training camp started but never reported to camp because of additional allegations from Anna Kane of physical and sexual abuse.

The league couldn't substantiate those charges but did suspend Kane for the first 21 games when it determined he submitted the fake vaccine card.

Kane did not get into any detail on those issues other than to say he is now fully vaccinated.

But the Sharks are in no rush to bring the 30-year-old Kane back to the NHL despite the fact he was their most consistent performer last season, when he had 22 goals and 27 assists in 56 games for his highest points per game rate of his career.

The Athletic reported over the summer that there was a rift between Kane and his teammates, many of whom don't want him back on the team.

Kane said he believes it was a "misconception" that there issues with so many players but also said he has had no contact with any of the players on the Sharks and said he didn't know if he'd ever play for them again.

Kane is owed $7 million a year through the 2024-25 season and has a modified no-trade clause that allows him to block a trade to all but three undisclosed teams.

He hired a new agent, Dan Milstein, in hopes of finding a trade that can get him back into the NHL soon but for now will bide his time in the minors.

"I'm under contract with Sharks," Kane said. "They've sent me here. I have shown up and will continue to show up and I look forward to whatever it is to come."

Being in the minors was a new experience for Kane, who went straight from juniors to the NHL after being drafted in the first round by Atlanta in 2009.

A player who spent much of his career skating on the top two lines in the NHL instead spent much of the practice skating with Kyle Topping and Steenn Pasichnuk, who are still hoping for their first NHL chance.

Barracuda coach Roy Sommer, who worked with Kane when he was on the Sharks staff in 2019-20, said he believes Kane will be on his best behavior because he knows that could expedite his return to the NHL.

Sommer said Kane's addition at practice Tuesday brought some added energy to the team and the coach isn't concerned about issues Kane may have had last season with his teammates and coaches.

"As close as that door is over there, it's still a long ways away," Sommer said of the separation between the teams that practice at the same facility.

"We have guys going back and forth all the time. But we don't really go into their business too much and they don't come into our business. You don't see a lot of guys hanging around with the Sharks guys so it's a short distance but a long ways."