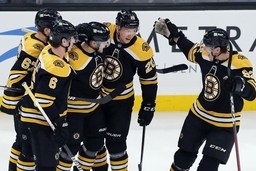 Cassidy is the first Bruins player or coach to be added to the protocol this season and will miss Boston's game Tuesday night against Detroit. General manager Don Sweeney told reporters after the Bruins' morning skate that Cassidy has mild symptoms.

According to NHL rules on positive COVID-19 tests for this season, Cassidy must isolate from the team for at least 10 days and get a doctor's approval to return.

Assistant coach Joe Sacco is taking over head coaching duties during Cassidy's absence for the Bruins, who have won five of their last seven. The Bruins visit Nashville on Thursday and return home to host Tampa Bay on Saturday.

The NHL has postponed five games so far this season - three for Ottawa and two for the New York Islanders - but the league has not seen widespread disruption of its schedule unlike last season.

Cases are still cropping up.

In St. Louis, Blues general manager Doug Armstrong said forward Tyler Bozak had been placed in COVID-19 protocol. Bozak, 35, has has one goal and six assists in 21 games this season.

In Edmonton, the Oilers canceled Tuesday's practice for "precautionary reasons" after defenseman Cody Ceci was placed in COVID-19 protocol a day before hosting Pittsburgh.