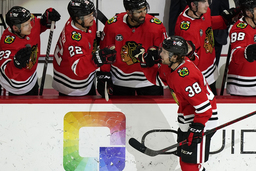 Hagel got hurt in the third period of Sunday night's 2-1 overtime victory against Nashville.

"We're going to miss him, but at least it's only two weeks," interim coach Derek King said Wednesday.

The Blackhawks also assigned defenseman Wyatt Kalynuk to Rockford of the AHL. Kalynuk, 24, likely is working on his conditioning after being sidelined by a right ankle sprain.

"Let's give him the right opportunity down there to give him a better chance up here," King said.

Forward Tyler Johnson and defenseman Isaak Phillips were removed from the NHL's COVID-19 protocol. Phillips was then assigned to Rockford.

The 23-year-old Hagel has four goals and two assists in 13 games this season. He agreed to a three-year contract in August that has an average annual value of $1.5 million.