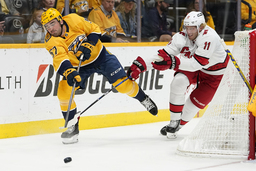 NASHVILLE, Tenn. (AP) Andrei Svechnikov made a mistake in the second period and made up for it in the third.

Svechnikov scored with 6:00 left in the third period, and Teuvo Teravainen added a late empty-net goal as the Carolina Hurricanes beat the Nashville Predators 3-2 Saturday night.

Jesper Fast also scored, and Frederik Andersen made 38 saves for Carolina, which has won its first two games.

"I haven't seen a lot of games like that for three years I've been doing this, where clearly the goalie was the reason we won the game," Carolina coach Rod Brind'Amour said. "Usually the goalies play good, but we're playing well. That was not the case tonight. We didn't play a very good game. He came up huge."

Ryan Johansen had a goal and an assist, and Filip Forsberg also scored for the Predators, losers of their first two games. Juuse Saros finished with 29 saves.

"We did a lot of things better tonight," Johansen said. "So many positives. ... The fact of the matter is that we are 0-2. We've got to find ways to win hockey games. It's hard to win hockey games in this league. It's too bad. We worked our butts off."

With the game tied at 1-all late in the third, Svechnikov beat Saros with a wrist shot from the left circle high to the short side for his third goal of the season.

"I made a big mistake when they scored their first goal, and I had to do that," Svechnikov said. "I'm glad we won today."

Fast scored the game's first goal at 6:19 of the first, with a wrist shot from the left faceoff dot that beat Saros high to the glove side. The goal was Fast's second of the season. He posted six in 46 games played last season, his first as a member of the Hurricanes.

Johansen tied the game at 1-all at 7:54 of the second. After stripping the puck from Svechnikov in the neutral zone, Johansen skated into Carolina's end and beat Andersen high to the short side with a backhand shot.

"I tried to do my process of focusing on the next shot," Andersen said. "You can't really focus on too much else, especially when you play a good team, I think you just want to stay in the fight and do the next shift. That's what the players do, and as goalies, it's the next shot."

Teravainen scored into an empty net with 1:12 remaining in the third.

Forsberg scored off of a rebound with 44.7 seconds remaining and Saros pulled for an extra attacker, but the Predators could not find the equalizer.

Nashville finished the 2020-21 season 29th out of 31 teams on the penalty kill, with a 75.6 success rate, and allowed two power-play goals in two opportunities in Thursday night's opener against the Seattle Kraken. But Saturday against the Hurricanes, the Predators successfully killed off all four Carolina power plays, including 1:37 of a 5-on-3. Nashville limited the Hurricanes to just three shots on goal during those four power plays.

"I thought the penalty kill was good," Nashville coach John Hynes said. "On the 5-on-3, I thought we stayed really compact. I thought the guys were in shot lanes. We didn't let a lot of pucks get through us. When they did get a couple to the net, I thought our net collapse was strong."

Carolina went 2-5 on the power play in their season-opening victory over the New York Islanders.

Due to last season's divisional realignment, the Predators and Hurricanes were in the Central Division during the shortened season. Carolina won six of the eight regular-season matchups and also dismissed Nashville in the teams' first-round playoff matchup in six games. With the teams back in their regular divisions for the 2021-22 season, the teams will meet just once more in the regular season, Dec. 19 in Raleigh.

Nashville recalled goaltender Connor Ingram from Milwaukee of the AHL earlier Saturday to serve as Saros' backup due to David Rittich being added to the NHL's COVID-19 protocol list.

The Predators host the Los Angeles Kings on Tuesday.

The Hurricanes are off until Thursday, when they travel to Montreal.