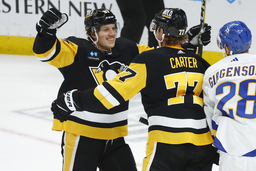 Carter scored a power-play goal 1:36 into overtime and the Penguins took advantage of a match penalty issued to Skinner to beat Buffalo 4-3 on Friday night.

Skinner was ejected for cross-checking Jake Guentzel across the face with 22 seconds remaining in the opener of the teams' two-game set. Skinner went after Guentzel at the boards in coming to the defense of goalie Craig Anderson, who was slashed by Guentzel after smothering the puck.

Skinner, who will automatically face an NHL disciplinary hearing for the cross-check, and Guentzel were also issued minor penalties for slashing.

"You don't want to see those kind of plays in our game. It's pretty tough to watch," Carter said. "But Jake's tough. He was back and ready to go. So we'll take the power play and lucky enough to get the extra point tonight."

Sabres coach Don Granato responded to a question regarding Skinner's cross-check by saying: "Just pretty simple, emotions got the best of him."

Anderson declined to question the officials, but took issue with Guentzel's jab.

"It wasn't much, but it was clear as day. There's no reason to do that, and then that threw us," said Anderson, who made 29 saves. "We got to hold our composure and we got to use that as a learning curve, learning tool for us."

The teams will meet again Saturday night in Pittsburgh.

Guentzel, Rickard Rackell and Brock McGinn also scored for the Penguins, who have won four straight and improved to 11-2-2 in their past 15 in a run that immediately followed an 0-6-1 skid. Pittsburgh also improved to 7-0-1 in its past eight road games.

Casey Mittelstadt set up all three goals for Buffalo, which lost when leading after two periods for the first time this season. The Sabres had won their previous 10 games when leading entering the third.

Carter was alone in front and set up by Rakell's pass from the left circle. The pass hit Carter in the skates, and he then used his long reach to slip the puck inside the right post.

The Penguins overcame a 2-1 deficit with Rakell tying the game by converting a rebound in front 2:53 into the third period. Sidney Crosby didn't register an assist, but deserved credit for helping set up Rakell's goal by sliding skates-first into the boards to keep the puck inside the zone at the left point.

"Sometimes it's not pretty but you've got to find a way to keep it in," Crosby said. "Sometimes it works, sometimes it doesn't. Glad that it ended up in a goal."

A game between two of the NHL's top-scoring teams was scoreless until Guentzel's shot from the slot beat Anderson inside the left post for a power-play goal with 4:24 left in the second period.

The Sabres responded with Victor Olofsson and Jeff Skinner scoring 67 seconds apart in the final two minutes of the period.

Buffalo's Tage Thompson, coming off a five-goal, one-assist outing against Columbus, had an assist to give him eight goals and seven assists in his past six. Skinner upped his streak to six games (four goals, seven assists), as did Sabres rookie Jack Quinn, who had an assist.

Guentzel now has three goals and nine points in his past six. Crosby failed to register a point to snap a six-game streak.