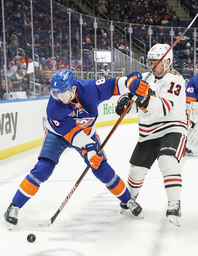 The Islanders fired 40 shots at Blackhawks netminder Arvid Soderblom in snapping a two-game losing streak and improving to 9-4-0 at home.

The Blackhawks had ended an eight-game losing streak on Friday, winning 5-2 over the Rangers. But Chicago generated minimal offensive chances against the Islanders and Varlamov, who recorded his first shutout of the season and the 37th of his career.

"I felt good today and we played great hockey," Varlamov said. "We came out really strong in the second and had some scoring chances. I'm happy to get the two points."

The Islanders are 4-1-2 in their last seven contests against the Blackhawks, including a 3-1 win in their last matchup Nov. 1 in Chicago.

"We didn't have the puck enough," Blackhawks coach Lyle Richardson said. "These guys are a good team. They wear you down and frustrate you. We created opportunities but we didn't have much luck."

Martin scored his third goal at 8:58 of the middle period. Assists went to Casey Cizikas and Scott Mayfield.

Parise made it 2-0 at 14:31 with his eighth goal before Nelson increased the margin to 3-0 at 15:14 with his 12th goal. It was the fourth time this season the Islanders scored twice in less than a minute.

"He just plays a consistent game every night," Islanders coach Lane Lambert said of the 38-year-old Parise, who hasn't missed a contest in his two seasons with the Islanders and has 12 points this season. "He really helps us with his play."

Defensemen Adam Pelech and Ryan Pulock assisted on Parise's goal, the 416th of his NHL career which ranks him ninth among active players.

Varlamov stopped eight shots in the first, six in the second and seven more in the third. The 34-year-old netminder improved to 6-3-0 this season.

"He was solid, steady and calm," Lambert said. "He made some big saves when we needed him to and he was rewarded."

Soderblom relieved Petr Mrazek - who suffered a groin injury - after two periods of Friday's win over the Rangers. The Blackhawks recalled goaltender Jaxson Stauber from AHL Rockford to back up Soderblom.

The Islanders improved to 16-2-0 when they score at least three goals.

REMEMBERING GILLIES: The Islanders honored Hall of Fame left wing and four-time Stanley Cup winner Clark Gillies before the game. A constant and charitable presence on Long Island, Gillies passed last January at age 67 from cancer. Islanders coach Lane Lambert recalled playing against the burly Gillies early in his career when Lambert was with Detroit in 1983-84. "I lined up against him in my rookie season and I'm fortunate that he was a Saskatchewan guy and I was a Saskatchewan guy," Lambert said. "So he probably took it easy on me." Added veteran Islanders forward Matt Martin, who was inspired by Gillies to start a foundation of his own: "I loved everything about him. It's great to be able to get one tonight."