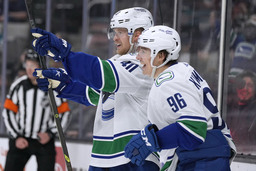 SAN JOSE, Calif. (AP) Andrei Kuzmenko scored at 1:12 of overtime to give the Vancouver Canucks a 4-3 victory over the San Jose Sharks on Sunday night.

Kyle Burroughs and Ilya Mikheyev also scored for the Canucks, and Thatcher Demko made 32 saves.

"It's a big one," Demko said "That's one of the ones that we probably haven't gotten yet this year where, you know, we maybe did some things wrong but stuck together as a group and found a way to win."

"Obviously, very frustrating not to win this game. Totally winnable game for us," Kahkonen said.

Kunin forced overtime, tying it off a pass from Erik Karlsson with 5:15 to go.

"I liked the tempo, for the most part, all night long," Sharks coach David Quinn said. "Listen, that's a good hockey team. I know what their record is but look at that lineup. They've got a lot of good hockey players."

Sharks: At Montreal on Tuesday night.