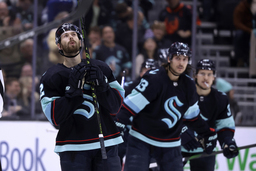 Playing their second NHL season, the Kraken got goals from a franchise-high seven players to win their third straight. Martin Jones made 22 saves as Seattle moved to 8-1-1 in its last 10 games.

"That was fun for the fans. It stunk for the coaches," Kraken coach Dave Hakstol said, half-joking. "This isn't the way you draw it up, but it's still a win and you've got to find different ways to win hockey games. This one had that feel right from the go tonight."

"It's kind of nice to see us chip in offensively. Not that you want every game to be run-and-gun like that, but we were able to pull through," Oleksiak said. "Any way you can squeak one out, that's huge. But I heard it's like a Kraken record or something, most goals in a game? So I'm sure the fans enjoyed that."

Meier's three goals gave him a team-leading 12. It was his first hat trick of the season and fourth of his career.

Logan Couture and Alexander Barabanov also scored for the Sharks.

"Obviously disappointing," Meier said. "To come back, and then we just gave up too much. We were turning too many pucks over. We had some parts of the game we played well but it just wasn't consistent enough for 60 minutes. I think that was a winnable game. We just shot ourselves in the foot."

It was a back-and-forth game throughout. San Jose led 2-1 after the first period. In the second, Seattle scored three times in less than five minutes to pull ahead, but the Sharks tied it 4-all a minute into the third before the Kraken pulled away.

Bjorkstrand gave the Kraken the lead for good about three minutes into the third with his second goal of the season. Schwartz scored the Kraken's season-high sixth goal 59 seconds later to give Seattle a 6-4 lead.

Meier pulled the Sharks within one with his third goal of the game before Beniers and Schwartz capped the scoring.

The Sharks got the game's first goal just more than four minutes in when Couture made a nice deflection in front on a shot from Nick Cicek. The teams also traded power-play goals in the opening period.

Dunn, Donato and Oleksiak scored in the second-period flurry for Seattle before Meier ended the run when he got behind the Kraken defense and easily finished a breakaway for his second goal of the game.

"It was a game going back and forth a lot. We were doing a really good job of taking care of chances we created and chances they gave us. It was really good to see so many players contributing," Burakovsky said. "I think we need to shut down some areas a little bit better. I don't think we should give up as many goals as we did, but overall we got two points and a great win."

NOTES: Sharks G James Reimer was inactive for the game. San Jose coach David Quinn said earlier in the week that Reimer had a lower-body injury, but could return later this week. G Aaron Dell was the backup one day after being recalled from the AHL. . The Sharks activated D Radim Simek from injured reserve and placed F Nico Sturm on injured reserve. . The Kraken activated Oleksiak from injured reserve before the game. Oleksiak had missed four games with a lower-body injury. ... Bjorkstrand scored for the first time since the season opener, breaking a 17-game drought.

Kraken: At the Vegas Golden Knights on Friday.