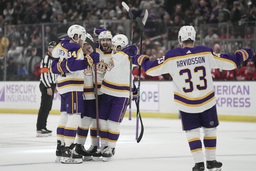 Cal Petersen made 18 saves for the Kings, who swept their four-game homestand and have won five in a row on home ice.

"Obviously, you want to be strong at home and play good in front of your fans, so I think it's a really big step in the right direction here now," Grundstrom said.

Dominik Kubalik and Dylan Larkin scored on the power play and Filip Hronek had a goal and an assist for the Red Wings, who were swept in the two-game season series. Alex Nedeljkovic allowed four goals on 21 shots.

"I hate harping on this, our margin for error is not great, so we're not gonna outscore out mistakes," Detroit coach Derek Lalonde said. "Our mistakes ended up in the back of our net."

Los Angeles has now won all five games against Atlantic Division opposition, including a 5-4 overtime victory in Detroit on Oct. 17.

The Kings led 2-1 after an eventful first period that started with Grundstrom scoring on a 2-on-1 rush - it was the second-fastest goal in team history. Dave Williams scored 7 seconds into a 5-2 win against the Hartford Whalers on Feb. 14, 1987.

"It's a hard game when you score right away, like you don't want your teammates to get flat and think it's going to be an easy game," Kings center Phillip Danault said. "We just kept playing our game for 60 minutes solid, so I'm really proud of our boys tonight."

Durzi made it 3-1 at 6:23 of the second, squeezing his shot in at the near post three seconds after a power play expired. He got his first career multigoal game on a blistering slap shot from the blue line during a power play with 6:19 left in the period.

Danault and Arthur Kaliyev picked up the assists on both of Durzi's goals, giving him three this season and six total in 80 career games.

"With the passers we got on this team, it's pretty surprising it's my first one," Durzi said. "But a lot of great plays, got to credit my teammates."

Detroit made things interesting in the third with goals from Larkin on the power play early in the period and Hronek with 2:01 remaining when Nedeljkovic was pulled for the extra attacker.

"We've had this situation a couple times, being on the road where we got down and we didn't respond very well. Tonight, we did and gave ourselves a chance at the end," Lalonde said.

Los Angeles had scored one power-play goal in 14 chances during the first three games of the homestand, but Danault liked how those units were moving the puck and creating chances. It was simply a matter of getting the end product, which finally came through against Detroit.

"Sometimes just our finish we're missing, but obviously it was working tonight," Danault said. "We worked at it and stay confident, and we believe in our group, and two big goals tonight on the power play."

NOTES: Kings F Brendan Lemieux was injured checking F Adam Erne in the second period and did not return. Coach Todd McLellan said Lemieux is "probably going to be out for a little while, but I can't give you any more than that" pending further evaluation Sunday. ... Red Wings F Tyler Bertuzzi participated in the morning skate and could return to action Tuesday after missing 13 games because of an upper-body injury.

Red Wings: At the Anaheim Ducks on Tuesday night.

Kings: Begin a four-game road trip at the Calgary Flames on Monday night.