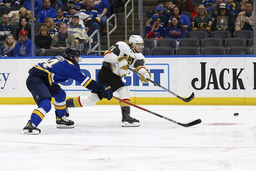 ST. LOUIS (AP) Jack Eichel had two goals and an assist, leading the Vegas Golden Knights to a 7-4 victory over the St. Louis Blues on Friday night in the regular-season finale for both teams.

"It's always good to win hockey games," Eichel said. "Every day you've got to be grateful to play in the NHL. We have a sold out arena and lot of fans come to see us play. It's our duty to give our best no matter. It's good to see us win. Winning is a lot better than losing."

The Blues, who finished third in the Central Division, will open the postseason at Minnesota next week. St. Louis, which lost its final two games, finished with a record of 49-22-11 and 109 points.

"It's a tough game. It really is," Blues coach Craig Berube said of the loss. "But it is what it is. The page is turned already. It's over. Playoffs are about hard work, effort, competing, that's what it really boils down to."

For the first time since entering the NHL as an expansion franchise in the 2017-18 season, the Golden Knights missed the playoffs.

"I wish we didn't have the long layoff that we're going to have.," Eichel said. "We can use the time to reflect in this offseason. I'm already excited for next year."

The Golden Knights had lost three-consecutive games in shootouts before the win against St. Louis. Vegas ended the season at 43-31-8 with 94 points.

"The guys played hard, you know. Again, not the greatest circumstances as we know," Vegas coach Pete DeBoer said. "We didn't mail it in. We showed up like we did most nights this year and battled hard and found a way to win. There'll be time to reflect on the bigger picture, but you know at least we can feel good about the effort we put in tonight."

William Karlsson scored the go-ahead goal 3:40 into the third period on a wrist shot, handing the Blues just their second loss (14-2-2) in their last 17 games. Jonathan Marchessault's 30th goal, which was unassisted, came at 6:41.

"It's good to end on this note - a full 60 (minutes) from our team," Whitecloud said. "We had a commitment to playing our game."

"I don't think it was our best game by any means, kind of watching a bit," O'Reilly said. "It's kind of a tough one. Obviously they're out of the playoffs. It's their last one. It's kind of a hard one to get stuff going, but it's behind us now. We had a great regular season and the focus draws to Minny (Minnesota) now. It's going to be a heck of a challenge."

Logan Thompson faced just 18 shots in making his 17th NHL start in goal and first against the Blues.

O'Reilly scored the lone Blues goal in the final period. His power-play score at 13:20 made it a one-goal game.

Each team scored twice in the second period.

"I was happy for O'Reilly to get to 20 tonight," Berube said. "It just shows the balance of the team."

Each team scored a goal in the first period.

Stone got Vegas on the board at 13:41 with a power-play goal. Alex Pietrangelo shot was blocked, but Stone was parked on the doorstep for the rebound and put it in. Stone has 22 points (8 goals, 14 assists) in 22 games against the Blues.

"I think it's just time to turn the page tonight and tomorrow start getting ready for the playoffs," Perron said. "We're going to start on the road and like we did in '19. I don't mind it."

Former St. Louis Cardinals manager Whitey Herzog watched the game from a suite and drew a rousing ovation when he was shown on the videoboard. ... Blues D Robert Bortuzzo returned to action after missing one game with an undisclosed injury. ... The Blues won the season series 2-1-0 against Vegas. They are 6-3-1 against the Golden Knights at Enterprise Center since they entered the NHL in 2017-18.