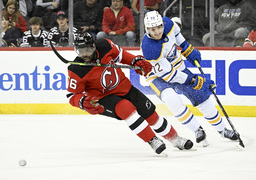 Rasmus Dahlin, Owen Power and Jeff Skinner also scored, and 40-year-old Craig Anderson had 29 saves for the Sabres in this matchup of teams eliminated from playoff contention.

Nikita Okhotiuk scored in his NHL debut and Jesper Boqvist also scored for the Devils.

"It was unreal. It's hard to explain those feelings when you step on the ice. It's all positive things," said Okhotiuk, a 21-year-old Russian. "And then the first game, the first goal, it's unreal."

"It's pretty surreal. Obviously nice just to get it out of the way," Power said. "I think a two-goal lead is a lot better than one so it was definitely nice."

Skinner put the game away with 3:57 remaining.

Casey Mittelstadt got 2 minutes for hooking Ryan Graves at 10:56 of the second period, but the Devils' time with the man advantage turned disastrous. Okposo scored from outside the blue line about a minute into the power play, and Tuch converted the rebound on a breakaway by Victor Oloffson 47 seconds later.

"We did it to ourselves. Short-handed goals are killers and our power plays have been struggling, so to get scored on short-handed is even worse," Damon Severson said. "So those ones hurt for sure, and it just kind of started the whole ball rolling against us."

"There's nothing more to it," Ruff said. "Can't break it down any other way. There was a play to be made."

Late in the period, Dahlin scored on a cross-ice pass and broke his stick in the process, making it 3-0 and provoking boos from the Prudential Center crowd.