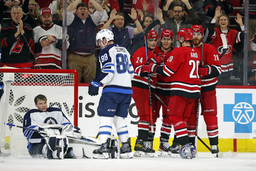 RALEIGH, N.C. (AP) Seth Jarvis has been watching his Carolina Hurricanes teammates closely as a rookie learning the NHL game. And he's following their advice when it comes to finding the back of the net.

"Go to the net," Jarvis said of the veterans' message, "and good things will happen."

Jarvis made good by scoring on a contact-filled rebound at 8:21 of the third period, helping the Hurricanes overcome a two-goal deficit and beat the Winnipeg Jets 4-2 on Thursday night.

It marked Jarvis' 15th goal of the season and it proved critical in helping Carolina avoid losing ground in the race for the Metropolitan Division lead.

Jarvis' score came after he took up position atop the crease as teammate Brendan Smith fired a straightaway shot. The puck hit Eric Comrie in the helmet, then Comrie's helmet came off as Jarvis made contact while reaching over and around him to swipe at the loose puck.

Jarvis stayed on his feet long enough while jostling with Winnipeg defenseman Nate Schmidt to push the puck into the net for the 3-2 lead on a play that ended with Jarvis laying on his stomach alongside Comrie.

The goal stood on a challenge by the Jets for goaltender interference, pushing the Hurricanes to their first lead of the night.

"I just kind of weaseled my way between the D and the goalie," Jarvis said, "and was just thanking God that didn't get called off."

Comrie didn't seem certain whether the puck or Jarvis knocked his mask off in those frantic moments.

"I think it should have been a goal," Comrie said. "I mean, the puck was continuing behind me. Play continued. It didn't put me in any danger. It was just, the puck was right there, he tapped it in backdoor."

Teuvo Teravainen and Jaccob Slavin also scored in the rally for the Hurricanes, who remained tied with the New York Rangers for the Metropolitan lead. Captain Jordan Staal added an empty-net goal in the final minute.

Antti Raanta, pressed into a lead role due to an injury to No. 1 goaltender Frederik Andersen, made 20 saves for Carolina. The Hurricanes had a 46-22 edge in shots.

Pierre-Luc Dubois and Kyle Connor scored first-period goals for Winnipeg. Comrie made 42 saves, including multiple big stops in the second period as the Hurricanes began to control play. Teravainen's power-play score in the final minute of the second period gave the Hurricanes a lift after they had done everything that period except find the back of the net.

The Jets ended a six-game trip with their fourth straight loss. They were eliminated from postseason contention Wednesday, marking the first time they'll miss the playoffs since the 2016-17 season.

"We know where we are in the standings, we know where we're at," Schmidt said. "But you do know that you can still show up and put yourself in good positions to win games. We're still in the business of winning games."

Slavin's putaway at the post early in the third tied the game, but it was set up by Andrei Svechnikov's dominating shift.

The 6-foot-2 forward charged in on the left side on Comrie only to be stopped at the crease. But he maintained possession of the puck and skated back out around the right side before turning strongly up the middle. His first shot was deflected, but he followed with another as he closed in on Comrie, with the puck kicking loose to Slavin for the finish

"In the third period, Svech kind of took over there," Carolina coach Rod Brind'Amour said.

The Jets nearly had a 3-0 lead, but Zach Sanford pinged the left post on an odd-man rush against Raanta with about 3 1/2 minutes left in the second.

The Hurricanes' injury report for this one included assistant coach Jeff Daniels. Brind'Amour said Daniels needed a few stitches after taking a puck off the head before the team's morning skate.

In what Brind'Amour called "one of the freakiest things I've seen," the puck apparently had bounced off a crossbar and bounced all the way to hit Daniels near the blue line. Daniels was behind the bench for this one.

Jets: Host Colorado on Sunday in the start of four straight home games to close the regular season.

Hurricanes: At New Jersey on Saturday in the first of three straight road games.