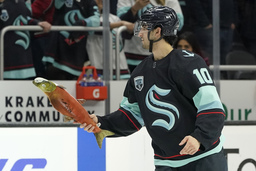 SEATTLE (AP) Matty Beniers scored in his second straight game to become the third NHL rookie this season to record a point in his first three contests and the Seattle Kraken beat the Ottawa Senators 4-2 on Monday night.

Beniers, the No. 2 overall pick in last year's draft out of Michigan, had an assist in his NHL debut last Tuesday in a 5-3 loss at Calgary. He scored his first goal on Saturday in the Kraken's 4-3 shootout win over New Jersey.

Beniers' goal at 9:52 of the second tied the score at 2-all. Adam Larsson took a shot from the right point, and Beniers, playing in the high slot, stretched out his stick and got just enough of the puck to redirect it into the left side of the net.

Beniers joined rookies Sean Durci of Los Angeles and William Eklund of San Jose as players to log a point in their first three games.

"We made a couple mistakes with the puck early in the second period, and that leads to opportunities in a hurry when you give them those types of chances," Kraken coach Dave Hakstol said. "That's what happened to give them momentum. We did a good job pushing back on it, and Beniers' goal was an important goal. It made us feel good again and got us going in the right direction."

Sprong gave the Kraken a 1-0 lead near the midpoint of a four-minute power play in the first period when Ottawa's Parker Kelly was in the box serving a double-minor for roughing.

Sprong's shot from the left circle went past Senators goalie Anton Forsberg's glove and into the right side at the 4:36 mark. That was his 12th of the year and fourth for Seattle since being acquired from the Washington Capitals at the trade deadline.

"When you get four minutes, you can create a lot of momentum, and we did that," Sprong said. "We haven't gotten many power-play goals the last little while (having gone 0 for 16 until Beniers scored one against New Jersey last Saturday). We got a four-minute power play early in the game and we wanted to get off to a good start there."

Tkachuk tied it 1-1 at 1:12 of the second with his team-leading 28th of the year. His hard shot from the left point was stopped by Kraken goalie Chris Driedger. But Driedger wasn't able to grab the loose puck, and it slid under him and into the net.

Holden gave Ottawa a 2-1 lead at the 3:15 mark when he took a cross-ice pass from Nikita Zaitsev and drilled a slap shot from the left circle high into the right side for his fifth.

After Beniers' equalizer, Rask put Seattle back in front 3-2 late in the second with a slap shot from the middle of the left circle at 16:45.

Ottawa managed 14 shots, and Driedger saved 12. Forsberg had 25 saves for the Senators.

"We had pretty good puck pressure everywhere," Hakstol said. "It seemed like we were a step quicker than they were most of the night. When you're playing without the puck, that's important, and with the puck, it's even more important."

Ottawa coach D.J. Smith was not pleased with any elements of his team's game.

"All the things we've done of late to have success, we didn't do today," Smith said. "Off the rush, turnovers, staying on pucks, just a lot of bad penalties - it just wasn't a very good game. Sometimes you take penalties, but just bad ones, that allowed us to not have any rhythm. Offensively, we had very little zone time."

NOTES: The teams split their two-game season series. The Senators won in overtime on March 10 at home, 4-3. ... Monday's contest was originally scheduled for Jan. 6, but was postponed for COVID-19 issues. It was the last of 10 such makeup games for Seattle and the 11th of 12 makeups for Ottawa, with No. 12 scheduled for Tuesday at Vancouver. . Former Seattle Seahawks star and Super Bowl champion Marshawn Lynch, along with Grammy winner and Seattle native Macklemore were announced on Monday as the newest members of the Kraken's investor group. They were introduced to the crowd prior to the opening faceoff.

Senators: At Vancouver on Tuesday night.