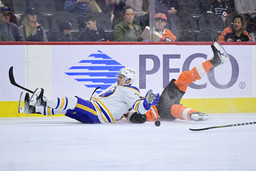 PHILADELPHIA (AP) Victor Olofsson and Tage Thompson each scored twice and the Buffalo Sabres beat the Philadelphia Flyers 5-3 on Sunday to sweep a weekend home-and-home series between the non-playoff teams.

The Sabres won 4-3 on Saturday night in Buffalo.

Anders Bjork had his first goal since Dec. 14, and Dustin Tokarski made 32 saves to help Buffalo sweep a season series over the Flyers for the first time since 1990-91.

"I liked our game," Sabres coach Donny Granado said. "It took us a little bit to get into it, but (Tokarski) helped us get through it and then the guys were good. It's a good win- it's always good to win."

Buffalo was able to take advantage of Philadelphia 15 giveaways, four of which ended up directly resulting in Sabres goals.

"We have learned what we have to do to in order to win tight games late," said Sabres defensemen Mattius Samuelsson, who had an assist and was a plus-3 on the night.

Olofsson hit the 20-goal mark for the first time in his career while posting his fourth multi-goal game of the season. Thompson's 36 goals this season has now doubled his career output from four previous NHL campaigns.

Kevin Hayes, Noah Cates and Zack MacEwen scored for Philadelphia, and Felix Sandstrom made 35 saves. The Flyers have dropped five straight and nine of 11, as well as five in a row at home.

The Sabres outscored the Flyers 14-9 in the season series.

Owen Power has played in just four games for Buffalo after his participation in the Frozen Four for Michigan. But the 19-year-old defensemen has already made an impression on his teammates. Even on a night when he was on the ice for all three Philadelphia goals, Sabres coach Donny Granado saw progress.

"You will still see some hiccups out there, but you see him being able to recalibrate and readjust," Granado said. "He's progressed in four games. Whatever happened tonight as a hiccup, I don't mind it because he's going to fix it quick because of that base. ... He's had two full NHL practices, so he'll get acclimated to pace and adjust."

Flyers: At Toronto on Tuesday night.