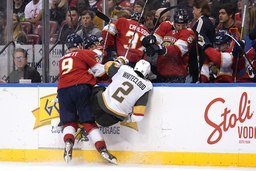 Aleksander Barkov scored his 200th NHL goal and 500th NHL point, and had an assist, and Mason Marchment had an empty-net goal. Spencer Knight made 24 saves for the Panthers, who improved to 22-3-0 at home.

"Those are the milestones you're going to think about after the season, after the career," Barkov said. "I'm happy to get it out of the way. We (held) our game together and played a really tight game. If we gave them anything, (Knight) was there."

Zach Whitecloud had the lone goal for Vegas, which had a three-game point streak come to an end. Robin Lehner stopped 28 shots.

"I thought we did a good job of generating opportunities," Whitecloud said. "They do a good job of having you in your own end and making you defend. We had some good looks, they just didn't go in."

Whitecloud gave Vegas a 1-0 lead when he fired the puck from the right circle over Knight's right shoulder at 7:51 of the first.

Barkov tied the score at 1 on his shorthanded goal, a shot from the right circle that got past Lehner.

Bennett put the Panthers ahead 2-1 with a wrister from above the left circle that bounced off Lehner's shoulder and into the net 1:18 into the second.

"That's a really good team," Bennett said. "They play hard, playoff-style hockey. I think we matched them well tonight and it was a solid 60-minute effort from our team."

Marchment added an empty-net goal with 53.9 seconds left to make the score 3-1, and Bennett's second goal came with an empty net with 28.3 left to stretch the lead to 4-1. The goal was the 20th this season for Bennett, a career high.

"I saw a lot of effort and a little bit of a lack of execution," Vegas coach Peter DeBoer said. "We were just off a little bit."

NOTES: Panthers D Gustav Forsling played his 200th NHL game. ... F Maxim Mamin was a late scratch and is day-to-day, according to Panthers coach Andrew Brunette.Vegas F Max Pacioretty played his first game since Dec. 28th after to wrist surgery. ... RW Reilly Smith returned after missing two games due to the NHL COVID-19 protocol, after appearing in the first 41 games.