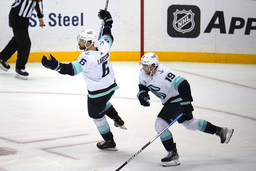 With the Kraken trailing 1-0, Jared McCann scored with 3:56 left in regulation against his former team to force overtime.

Larsson, who scored in consecutive games for the first time in his career, then won it 1:17 into the extra period to give Seattle its fourth win in six games following a nine-game losing streak. The Kraken were 0-4 in previous overtime periods.

Seattle picked up just its fifth road win of the season, improving to 5-11-2 away from home. The Kraken's last road win came on Dec. 14 at San Jose, as they dropped their previous four games away from home.

Evgeni Malkin scored his fourth of the season, a power-play goal at 8:41 of the third, but the Penguins had their season-best eight-game home winning streak end. Tristan Jarry made 27 saves for Pittsburgh, which has still won 17 of its last 20 games overall.

McCann tied it at 16:04 of the third when he deflected Vince Dunn's point shot behind Jarry. McCann played parts of three seasons with Pittsburgh, scoring 39 goals and 84 points in 141 regular-season games. Pittsburgh traded McCann to Toronto during the 2021 offseason and he was eventually selected by Seattle in the expansion draft. McCann, who leads the Kraken in points, is two goals shy of matching his career high.

Neither team scored a goal in the first two periods, as Pittsburgh held a 20-9 advantage in shots. That included an 11-2 edge in the second period, as Seattle went 16:57 without a shot through the end of the first and the beginning of the second.

Grubauer made a sliding pad save on Jeff Carter during a 2-on-1 with Evan Rodrigues. Later in the period, Pittsburgh pressured with a 91-second even-strength shift in the Seattle zone that resembled a power play, but the Penguins couldn't capitalize.

The Kraken poured it on the rest of the way, outshooting Pittsburgh 18-4 in the third period and 2-0 in the overtime.

NOTES: Malkin missed the first 34 games of the season because of offseason knee surgery, but has four goals and 10 points in nine games. He has two goals and seven points during a six-game point streak. ... Larsson scored in consecutive games for the first time in his career. He tallied a point in three straight games for the first time since February 2015 and equaled his career high for goals in a season.

Pittsburgh has power-play goals in five of its last six games. The Penguins have converted in 10 of their last 12 overall with the man advantage.

Sheahan played 122 regular-season games with the Penguins, totaling 18 goals and 41 points. Tanev, who missed his 12th game with a torn ACL, was selected from Pittsburgh in the expansion draft, while Oleksiak had 25 points in 83 regular-season games.

Francis won back-to-back Stanley Cups with the Penguins during the 1991-92 seasons, while Botterill was part of the franchise's three most recent championships (2009, 2016-17) in a front office role.