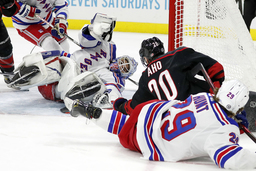 RALEIGH, N.C. (AP) Tony DeAngelo didn't miss a chance to show his former team what he's been up to this season.

DeAngelo had a goal and two assists as the Carolina Hurricanes beat the New York Rangers 6-3 on Friday night.

"It was obviously exciting to play them," DeAngelo said. "I have a lot of good buddies over there. It's not like there's hard feelings."

After parts of four seasons with the Rangers, DeAngelo joined the Hurricanes as a free agent in the offseason. His time in New York was rocky, and the Rangers parted with him after a confrontation with goalie Alexandar Georgiev. But he's been warmly embraced by Carolina.

"A perfect fit for us," teammate Sebastian Aho said.

Aho also had a goal and two assists, while Vincent Trocheck, Seth Jarvis, Jesper Fast - another former Ranger - and Nino Niederreiter also scored in the first meeting of the season between the top two teams in the Metropolitan Division. Teuvo Teravainen and Andrei Svechnikov had two assists apiece, and Frederik Andersen stopped 20 shots in Carolina's third straight win.

Mika Zibanejad and Chris Kreider each had a power-play goal and an assist for the Rangers. Greg McKegg, an ex-Hurricanes player, got his first goal of the season. Georgiev, playing for the first time in more than a week, made 29 saves.

DeAngelo has 31 points (7 goals, 24 assists), the most points for a defenseman in his first 30 games with the organization in franchise history.

"It was nice to put on that kind of performance," DeAngelo said. "I thought our team played great."

"He has been really important for us and a big part of our team," Fast said.

Fast played seven seasons in New York. He's in his second season with the Hurricanes, but this was his first game against the Rangers.

"Very excited and a fun game to play," Fast said. "We wanted to make sure we played the right way and send a little message there."

The Rangers didn't want to put too much emphasis on the impact of former teammates Friday night.

"It's just a regular game," Zibanejad said. "It probably means a lot for a guy playing against his former team."

Since they were shut out for the first time this season Jan. 13 by Columbus, the Hurricanes have totaled 17 goals in three games. That matches the team's best goal production in a three-game span this season.

The Rangers, who were riding a three-game winning streak, were aware of Carolina's high-pressure approach, but they weren't happy with how they handled it.

New York played solidly for the first eight minutes, but Gallant said that was followed by 10 to 12 minutes of what seemed like domination by the Hurricanes.

Trocheck redirected DeAngelo's delivery from inside the blue line off the post on the game's first power play to open the scoring on the way to a 3-0 lead by early in the second period.

Kreider and McKegg drew New York to 5-3 with goals just 74 seconds apart in the first 6 1/2 minutes of the third period.

The Hurricanes had gone 11 consecutive games without giving up a power-play goal until Tuesday night at Boston. Now they've given up three across two games. New York became the second team with more than one power-play goal in a game against Carolina this season.

Carolina has scored five or more goals in 12 games this season, winning each of those.

This was the fourth game in which the Rangers allowed more than five goals, and the first since a 7-3 loss to Colorado on Dec. 8.

Hurricanes left wing Jordan Martinook is on the COVID-19 protocol list. He missed more than a month with an injury before returning for two games prior to this latest development.

The Rangers' scratches included right wing Julien Gauthier, a former first-round draft pick of the Hurricanes. He's without a point in his last nine games.