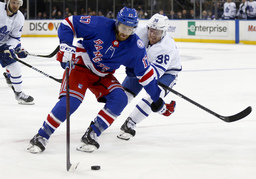 By VIN A. CHERWOO

NEW YORK (AP) Ryan Reaves scored twice, Adam Fox had two goals and an assist, and the New York Rangers scored three times in the third period to beat the Toronto Maple Leafs 6-3 on Wednesday night for their seventh win in nine games.

Chris Kreider got his 25th goal of the season, Ryan Strome had a goal and an assist, and Jacob Trouba and Artemi Panarin each added two assists for New York, which rallied from a pair of two-goal deficits. Igor Shesterkin stopped 35 shots - including 27 over the final two periods after giving up three goals in the first.

Mitch Marner had a goal and an assist, and Ilya Mikheyev and Michael Bunting also scored for the Maple Leafs. Jack Campbell had 21 saves.

Shesterkin stopped William Nylander on a breakaway 2:11 into the third period to keep the score tied at 3 and draw chants of "I-gor! I-gor!" from the home crowd.

Strome put the Rangers ahead with 9:10 remaining. Ryan Lindgren's shot was deflected by Nylander, but the puck went to Strome on the right side and he put it in before Campbell could get over in position. It was Strome's ninth of the season.

Kreider made it 5-3 as he scored from the left side on a rebound of Jacob Trouba's shot from the right point with 4:27 remaining.

Auston Matthews, who scored in 10 straight road games, nearly extended his streak and pulled the Maple Leafs back within one with 3:52 remaining when the puck went off his skate and in, but it was disallowed after officials determined he had made a distinct kicking motion.

The Maple Leafs pulled Campbell for an extra skater with just under 3 minutes to go, but Fox had an empty-netter with 2:24 left to seal the win.

With the Rangers trailing 3-1 after 20 minutes, Reaves got the Rangers within one for the second time with his second of the night at 2:58 of the second. He got the rebound of K'Andre Miller's shot off the end boards on the right side and knocked it into the top right corner from a sharp angle for his second career two-goal game.

New York then tied it with 2:11 remaining in the period. After a turnover by Toronto at its blue line, Strome sent a pass across the front of the goal to Fox, who quickly beat Campbell from the right side through the five-hole for his sixth.

Shesterkin had four saves on John Tavares in the final 21 seconds of the second, including a deflection that went off the goalie's helmet and over the top of the goal.

Toronto got off to a fast start, outshooting the Rangers 7-0 over the first six minutes and 11-7 while taking their 3-1 first-period lead.

After a turnover by the Rangers near their goal line, Mikheyev knocked in the rebound of a shot by Pierre Engvall for his sixth 2:44 into the game.

Marner made it 2-0 just 46 seconds later with a power-play goal. It was Marner's eighth of the season and first on the power play in 101 games.

Reaves got the Rangers on the scoreboard with his 50th career goal and first since being acquired by the Rangers from Vegas in July.

Bunting restored Toronto's two-goal lead nearly 5 minutes later on a fortuitous deflection on an odd-man rush as Matthews' shot rebounded off Sheskterkin and then off Bunting's knee and in.

Nylander's assist on Marner's first-period goal was the 300th of his career. ... Reaves had two goals for the first time since April 25, 2013, against Calgary while playing for St. Louis. ... Rangers F Kaapo Kakko played in his 150th career game. ... Mika Zibanejad had an assist on Fox's second goal, extending his season-high point streak to six games.

The Rangers honored Teddy Balkind, the Connecticut 10th grader who died after taking a skate to his neck during a junior varsity game earlier this month. All Rangers players wore Balkind's No. 5 on the back of their jerseys during pregame warmups. A moment of silence was held in his honor before the national anthem, and his St. Luke's teammates were recognized in attendance.

Rangers: At Carolina on Friday night.