Capitals score on own net; Wild come back to win in shootout 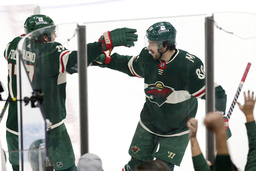 ST. PAUL, Minn. (AP) Kevin Fiala and Frederick Gaudreau scored in the shootout as the short-handed Minnesota Wild took advantage of a Washington Capitals own-goal in a 3-2 win on Saturday night.

Kaapo Kahkonen made 29 saves and stopped two attempts in the shootout for Minnesota, which put the game into overtime with a goal from Mats Zuccarello with 34.7 seconds left in regulation.

The Wild wouldn't have been in position if the Capitals didn't put the puck in their own net. Playing out a delayed penalty, Washington forward Carl Hagelin had a pass go between two teammates and slide all the way into the empty net on the other side of the ice with goalie Zach Fucale on the bench.

"I don't think I've ever seen one live for sure," Minnesota coach Dean Evason said of the own goal. "But we needed that goal at that time, right? We were reeling a little bit. They were coming. We needed some kind of a break. And, we were fortunate to have got it and really helped our mental psyche."

Marcus Foligno was given credit for the Wild goal after being the last Minnesota player to touch the puck before Hagelin's missed pass. It was Foligno's 100th career goal. The Wild were down nine regular starters due to COVID-19 and injuries.

"The lineup is the lineup," Foligno said. "You can't make excuses. Everyone is buying in and it was nice to get rewarded. And after (the own goal), I thought we really picked it up a little bit and got our legs going."

Fucale made 21 saves for the Capitals and set an NHL record for the longest shutout streak to open a career at 138 minutes, 7 seconds. Zuccarello snapped the streak.

"I thought we played well tonight," Washington coach Peter Laviolette said. "It's disappointing on the results. You talk about the first goal and then they tie it up at the end and win in a shootout. So, it leaves you with a really lousy taste in your mouth. But I thought the guys put up a pretty good effort."

Connor McMichael and Evgeny Kuznetsov scored for the Capitals before the miscue put Minnesota on the board.

Fucale, a second-round draft pick in 2013 by Montreal, earned his second career start after relieving No. 1 netminder Ilya Samsonov in the 5-1 loss at St. Louis a night earlier. Samsonov had allowed four goals on 16 shots and Fucale stopped all seven shots he faced in his second career game.

He opened his career with a 21-save shutout at Detroit on Nov. 11.

Fucale stopped nine shots in an even first period between the teams and then set the NHL record for shutout streak to open his career three minutes into the second. Fucale surpassed Minnesota's Matt Hackett, who held the previous record at 102:48 in 2011.

"They just told me about that," Fucale said after the game of getting the record. "That's incredible. I did not know that. That's wild, wild stuff. It's good, quality night, but I'm mad at myself at (Zuccarello's goal). To me, that's a tough goal to give. Just another little experience I've got to learn from."

Wild defenseman Alex Goligoski was added to the COVID-19 protocols earlier Saturday, the latest blow to Minnesota's lineup. Goligoski is one of three players in the protocols, joining Jordan Greenway and Brandon Duhaime.

The Wild recalled forwards Victor Rask and Kyle Rau and defenseman Dakota Mermis from the taxi squad prior to the game.

Capitals: Return home for one game against Boston on Monday night.