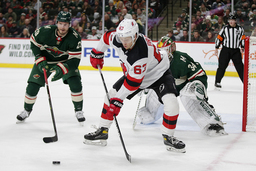 ST. PAUL, Minn. (AP) Kirill Kaprizov had two goals and an assist as the Minnesota Wild kept rolling with a 5-2 win against the New Jersey Devils on Thursday night.

Ryan Hartman had a goal and two assists, and Rem Pitlick and Dmitry Kulikov also scored for Minnesota, which has won five games in a row and is the NHL's highest-scoring team since Nov. 2 with 64 goals in 15 games.

Hartman scored on his 10th shot of the game and his line with Kaprizov and Mats Zuccarello combined for 16 shots.

Kaapo Kahkonen made his second straight start in net for the Wild and finished with 29 saves.

With Hartman's surprising breakout and Kaprizov on a scoring tear in his second NHL season after winning the Calder Memorial Trophy, Minnesota is no longer the defensive-minded team of the past. The Wild entered the day fourth in the league in goals per game and have scored at least four in 12 of the past 15.

Minnesota's 33 points are the best start in franchise history after 23 games.

"We're having a great time," Hartman said. "But we're playing the right way and that's why it's happening. We're playing underneath the puck. We're playing smart defensively. . Overall, the way we've been playing is how we want to play and we're getting off to leads which is a nice change."

All four lines have contributed to the inflated goal totals, none more so than Kaprizov and Hartman's pairing. Zuccarello returned to the right side Thursday after missing two games with a hand injury.

Kaprizov started the scoring against the Devils midway through the first period as he got the corner on Graves and drove the net. Controlling the puck on his backhand, he quickly switched to his forehand and beat Blackwood.

The 24-year-old Russian added his eighth goal of the season 2:28 into the second to give Minnesota a 3-0 lead. Kaprizov has six goals and 11 assists in his past eight games.

"Yeah, we just went out there, played our game, tried to play hockey, try to create opportunities for each other and have fun," Kaprizov said through a translator when asked about his line. "It wasn't anything in particular that we did, just went out there and played."

Pitlick, a rookie claimed off waivers from Nashville in October, scored his fifth goal in the first. He entered play tied for eighth among rookies in scoring.

The Devils, who have lost three of four, got back within reach with two goals in the second to make it 3-2.

Graves scored his second of the season on a big slap shot from the point just 24 seconds after Kaprizov's second goal. Tatar scored for the fourth time in six games on a breakaway as Dougie Hamilton passed ahead to spring him.

Hamilton had two assists in the game.

"A little bit of life and then we give up the next one," Graves said. "I think we just have to do a better job of managing the game. ... Everyone can look within and there's things that we can all do to make the game a bit easier. We're making the game kind of tough on ourselves right now."

Kulikov, the former Devil, restored Minnesota's two-goal advantage with his second of the season in the second. Hartman added his 13th goal in the third. He's tied for eighth in the league in goals.

"Our defense is better than that," Ruff said. "Our defense probably had as tough a night as I've seen them."

Devils: Play their second game of a back-to-back Friday in Winnipeg.