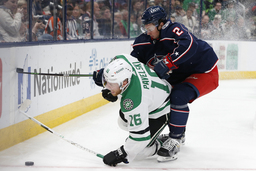 COLUMBUS, Ohio (AP) Gregory Hofmann scored his first NHL goal and added an assist, leading the Columbus Blue Jackets to a 4-1 win over over Dallas Stars on Monday night.

Oliver Bjorkstrand added a goal and his 100th career assist, and Zach Werenski had a goal and an assist as Columbus won for the second time in three games. Alexandre Texier scored into an empty net.

Tyler Seguin scored for the Stars.

Elvis Merzlikins stopped 31 shots and is unbeaten in four starts this season. He turned back a barrage of shots and cleared the zone with a confident poke check, carrying a shutout bid into the final three minutes of the game.

Bjorkstrand put Columbus on the board early, taking a pass from Jack Roslovic and Hofmann at 5:53 of the first period and beating Braden Holtby on the rush for his third goal and team-leading eighth point.

"Until we decide to put our best game forward, which means preparation and playing with some passion and some competitiveness, then this is what it's going to look like," said Rick Bowness, who coached his 100th with the Stars. "You can tell the passion and the competitiveness just wasn't there. The big gaps between our forwards and our defense, and when that happens you are playing slow and you're usually getting outworked."

The Jackets appeared to go up 2-0 at 7:17 of the second, but Cole Sillinger's shot was deemed not fully across the goal line.

Hofmann made it 2-0 and brought the home crowd to its feet with his first NHL goal at 10:39 of the second, a shot off a feed from Bjorkstrand.

"It was a great night, a very special night," Hofmann said. "I thought maybe I could score in the first. It came in second period. It was a good job by Bjorky. I was able to finish. It was really nice."

Columbus went up 3-0 on Werenski's goal at 5:14 of the third, redirecting a Sean Kuraly shot and giving Kuraly his first point since joining his hometown team from Boston.

"I think if we are just looking at tonight's game, they just simply worked harder than us. That was pretty much it," winger Jamie Benn said. "They had a lot of young guys over there that just simply work, but we didn't want to match it tonight for some reason."

Seguin made it 3-1 at 17:41 of the third after Holtby was pulled for an extra skater.

Holtby, who made his fifth start in six games, stopped 22 shots in the loss.

The Blue Jackets have had 11 players record goals this season, while 17-of-20 skaters have recorded at least one point.

Defenseman John Klingberg returned to the Stars lineup for the first time since suffering a twisted leg in the season opener Oct. 14 against the New York Rangers. He logged over 20 minutes of ice time.

The Stars, who have been the visiting team for five of their last six games, return home for their next two games to face Vegas and Ottawa before heading out on three-game West Coast swing.