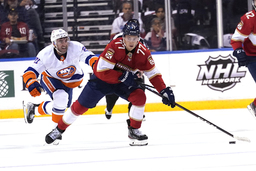 SUNRISE, Fla. (AP) The only hat trick of Sam Bennett's career before Saturday wasn't exactly enjoyed by the Florida Panthers, since it happened against them nearly six years ago.

They liked this one far more.

Bennett scored three times, Sergei Bobrovsky stopped 28 shots and the Florida Panthers topped the New York Islanders 5-1 on Saturday night for their second win in as many games this season.

"It's nice to have a good start," Bobrovsky said.

Jonathan Huberdeau got the 500th point of his career for Florida, while Anthony Duclair and Aleksander Barkov added goals for the Panthers.

Oliver Wahlstrom scored for the Islanders, his power-play goal 3:30 into the third getting New York within 3-1.

But Bennett got his third of the night midway through the final period, then Barkov made it 5-1 with his first of the season.

Ilya Sorokin stopped 24 shots for the Islanders, who have been outscored 11-4 this season and failed to get a point out of their first two games for only the second time in the last 15 years. It also happened in 2016-17.

"It's a little concerning, but to me, I just look at the game from an overall view," Islanders coach Barry Trotz said. "I thought we were really good in the first two periods ... but when we're breaking down, we're really breaking down."

Florida is off to a 2-0-0 start for just the seventh time in the franchise's 28 seasons, and Bobrovsky was in net for both.

"Bob was great," Panthers coach Joel Quenneville said. "As the game wore on, I thought we had some good possession time, good speed to our game and some good plays as well."

Bennett's other hat trick was actually a four-goal game - against Florida, for Calgary on Jan. 13, 2016. It was the 55th hat trick in Florida history, with 32 Panthers now having at least one.

The Panthers have three different players with at least a two-goal game already this season. That's never happened before in team history; there had been two different two-goal scorers in the first two games of a season on four other occasions.

"It's awesome to see a bunch of different guys getting on the scoreboard and finding that confidence early in the year," Bennett said. "I think that's big for any player. We're just going to keep it rolling."

Carter Verhaeghe and Aaron Ekblad had the two-goal contests in Thursday's opener. Bennett joined them Saturday, getting his first when the puck bounced through the crease onto his stick, and he tapped it into wide-open netting for a 1-0 lead in the first period.

The second one took a little more effort; he scored on a wraparound on the play where Huberdeau had an assist for his milestone point.

Duclair got his second of the season on a breakaway late in the second, and Bennett's third of the night came on a shot from the slot that bounced off Sorokin.

"Once they got the fourth goal, we stopped playing," Trotz said. "They smelled blood and they kept coming at us."

The game was the 98th pitting Quenneville against Trotz.

There were three ties, the last of those coming in 2002, two years before ties no longer became possible in NHL games.

Florida has now won only two of the last nine meetings against the Islanders. The teams last played in August 2020, when New York ousted the Panthers in the qualifying round for that season's playoffs, the Isles winning the best-of-five 3-1. ... This was the first of two visits to Florida for the Islanders on this "trip." Their 13-game road stretch to start the season ends when they visit the Panthers again on Nov. 16; the Islanders' home debut at the new UBS Arena in Elmont, New York comes on Nov. 20 against Calgary. ... Ekblad was shaken up in the first period but returned in the second. "He's fine," Quenneville said.