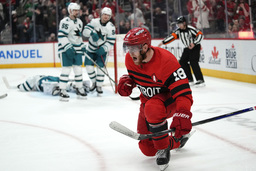 DETROIT (AP) Andrew Copp scored 25 seconds into overtime to give the Detroit Red Wings a 3-2 victory over the San Jose Sharks on Tuesday night.

Copp banged in a rebound near the goal crease after goalie James Reimer stopped Michael Rasmussen's shot. Rasmussen took control of the puck after a faceoff in the Sharks' zone.

"It wasn't too tough. He did all the work," Copp said about Rasmussen. "He won the battle off the faceoff after I kind of lost it and took it right to the cage and both guys (defenders) kind of went to him."

Rasmussen and Adam Erne scored in regulation, with Dylan Larkin reaching 400 NHL points with an assist on Erne's goal. Ville Husso made 26 saves.

"Any win is good for us," Detroit coach Derek Lalonde said. "It feels like any time we got a win, it's difficult, which is fine."

Couture was on the ice during Copp's winner.

"I'm going to take a look at it, but I won the faceoff toward the middle and Rasmussen got a partial breakaway off it,' he said. "After that, everyone was whacking the puck around, I thought I had a chance to clear it, but I put it right onto Copp's stick."

The Sharks played their third game in a stretch of eight consecutive road contests. They're still looking for their first win on the trip after losing to Columbus and Boston during the first two legs.

"It was a solid game, not great, but I thought there was a lot more honesty in our game, a lot more pace and a lot more compete," Sharks coach David Quinn said. "I'm just disappointed in the ending."

The Red Wings were playing their last home game before the All-Star break. Detroit was 3-8 in overtimes and shootouts this season prior to Tuesday's victory.

"I've got no clue where we were last year or how we were playing." Rasmussen said. "We're just collectively as a group trying to make a (playoff) push here."

Erne opened the scoring with sixth goal of the season, redirecting Larkin's shot from near the blue line at 2:17 of the second period. Meier tied it at 7:58 of the period with his 28th goal, jamming in the puck from behind the net.

"The game ended up being a lot more complicated than it needed to," Copp said. "We've go to be able to put the pedal down a little quicker and eliminate some of the mistakes we had with the puck in the second period that kind of let them back in the game."

Detroit F Tyler Bertuzzi missed his second straight game due to a lower body injury. ... Karlsson has 28 points in 28 career games against the Red Wings. ... Detroit swept the two-game season series. It won at San Jose 7-4 on Nov. 17.

Sharks: At Carolina on Friday night.