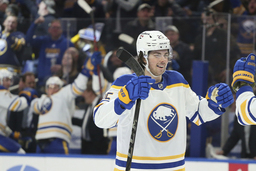 BUFFALO, N.Y. (AP) Casey Mittelstadt scored 2:07 into overtime to give the Buffalo Sabres a 3-2 win over the Chicago Blackhawks on Friday night in the final game for two non-playoff teams.

Tage Thompson scored his 38th goal for the Sabres, and defenseman Owen Power, the No. 1 overall pick in the 2021 draft, added his second goal in eight NHL games.

Buffalo (32-39-11) rallied for its fifth win in six games to close out its 11th consecutive season missing the playoffs, an NHL record. Dustin Tokarski made 19 saves.

"I think that kind of sums up the whole year for us," Mittelstadt said. "Didn't have it probably in the first two periods, and the third we just came out, played hard, stuck together. Pretty proud to be part of a a group like that."

Mittelstadt poked in the rebound from Dylan Cozens' shot for the winning goal, his sixth of the season.

Chicago snapped a two-game win streak to conclude a disappointing season. The Blackhawks finished 14th in the Western Conference with their lowest point percentage (.415) in 16 seasons. It's the fourth time in five seasons the Blackhawks haven't been in the playoffs after winning three Stanley Cups from 2010 to 2015.

This season was clouded by the resignation of general manager and president of hockey operations Stan Bowman in October after a report by an outside law firm found the organization mishandled allegations that an assistant coach sexually assaulted a player during the team's Stanley Cup run in 2010.

"I think the future's bright," Blackhawks interim coach Derek King said. "But there is a lot of work to do."

Despite placing 11th in the Eastern Conference and extending their postseason drought, the Sabres saw several young players develop and ended up with a 16-9-3 record over the final two months of the season.

"When you look at the season, and our culture, and what we want to build, I thought it was a good reward for our guys," Sabres coach Don Granato said. "Hopefully symbolic of you're going into an offseason, you don't want to end it on a sour note. And you find something within to come back in that game."

Many in the crowd of 16,505 - the second-largest in Buffalo this season - hung around after the final horn to give an extended ovation to Sabres broadcaster Rick Jeanneret, who is retiring after 51 years.

Jeanneret addressed the crowd via the video scoreboard before going down to the ice to greet Sabres players and fans.

The Sabres raised a banner to honor Jeanneret before the only sold-out game this season at KeyBank Center on April 1. The 79-year-old has been a part of the Sabres' broadcasts on radio and TV since 1971-72, the franchise's second season. He achieved the NHL's highest broadcasting honor in 2012, upon earning the Hockey Hall of Fame's Foster Hewitt Memorial Award.

"Winning like that makes it that much more special for R.J.," Thompson said. "I think we owed that to him."

Sabres goalie Craig Anderson and forward Kyle Okposo were held out with undisclosed injuries. Okposo, whose 21 goals this season were his most in six seasons with Buffalo, was honored before the game for winning the Rick Martin Memorial Award, which was voted on by Sabres fans. The 40-year-old Anderson went 17-12-2 in his first year with the Sabres, his sixth team in 19 NHL seasons. It was his best record since going 25-11-4 with Ottawa in 2016-17.

Injured Sabres goalie Malcolm Subban, a former Blackhawk, sang the national anthem before the game. . Blackhawks defenseman Jake McCabe received brief recognition on the video scoreboard in his first game back in Buffalo since signing a four-year contract with Chicago during the offseason. McCabe played 353 games in eight seasons with the Sabres.