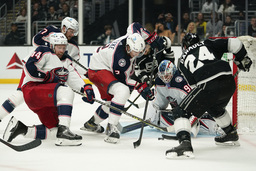 LOS ANGELES (AP) Phillip Danault scored his career-high 24th goal, Dustin Brown also scored in the first period and the Los Angeles Kings took a big step toward a playoff berth with a 2-1 victory over the Columbus Blue Jackets on Saturday night.

Jonathan Quick made 21 saves for the third-place Kings in just their second win in six games. The Kings couldn't find the net again after their two first-period goals despite outshooting the Jackets 38-22, but their lead stood up in a tight-checking game.

Kings coach Todd McLellan was pleased with his team's return to its defense-first form after a 9-3 loss at Colorado on Wednesday. Los Angeles blocked a season-high 26 shots.

"Felt a lot more like it should for our group," McLellan said. "We're not a high-scoring team. We're comfortable in one-goal games, tight games, so it felt like we were playing the type of game we needed to play. ... Tonight was much more familiar to our group."

Los Angeles is in a three-year playoff drought, but its chances of holding off Vegas for the third postseason spot in the Pacific Division improved earlier Saturday with Edmonton's victory over fourth-place Vegas.

"This time of the year, we'll celebrate a win any way we can," McLellan said. "Ugly, from behind, some of them you might not even deserve, but we need them and we'll take them any way we can get them."

By beating Columbus in the evening, the Kings opened a three-point lead over the Golden Knights, who have one game in hand. Los Angeles' final five games are all against teams currently out of the playoff picture.

"Obviously, the last game, we were not satisfied, not happy," Danault said. "So we had to bounce back, which we did right away in the game. Big two points, and every single game is going to be big until the end, so it's a do-or-die."

Sean Kuraly scored in the second period and Elvis Merzlikins stopped 36 shots for the Blue Jackets, who opened their three-game California road trip by losing in regulation for only the second time in six games.

"The emphasis to this game was going to be a team that was desperate and going to come out strong, and it wasn't like it was a surprise to us," Kuraly said. "So I guess that's the frustrating part. Just gave them a couple that we'd like to have back, and Elvis kept us in it the whole night."

The Jackets were formally eliminated from playoff contention earlier in the day with Washington's 8-4 victory over Montreal. Columbus has missed the postseason in two straight seasons after earning four consecutive playoff berths.

Brown scored just 1:41 after the opening faceoff, converting a pass from Blake Lizotte on a 2-on-1 rush. The former Los Angeles captain hadn't scored a goal since March 6, shortly before he missed 14 games in a monthlong injury absence.

Danault doubled the Kings' lead later in the first with a sharp setup from Viktor Arvidsson. The goal was Danault's ninth point in nine games.

"They don't give up much," Columbus coach Brad Larsen said. "That team, they're a real stingy team, so you've got to fight for your ice, and you knew you were going to get their best. This is pretty much a must-win for that team. So I thought we got a little bit better, and it's good experience for us."

Kuraly trimmed LA's lead early in the second when Ohio native Carson Meyer elevated a setup pass from behind the net over Quick and right down onto Kuraly's stick for a goal in the center's return from a two-game injury absence.

"I did see him in the slot, but I was trying to put it off of Jonathan Quick's back and try to score myself," said Meyer, who has three points in his first six NHL games. "But it worked out. I should have known he was going to the net anyway. He always is."

Andreas Athanasiou returned from a 17-game absence since mid-March with an upper-body injury for the Kings.

Blue Jackets: At Ducks on Sunday.

Kings: At Ducks on Tuesday.