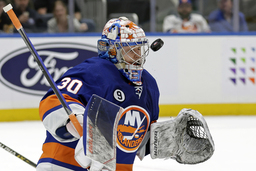 MONTREAL (AP) Ilya Sorokin made a career-high 44 saves to tie the New York franchise record for shutouts in a season with seven, helping the Islanders spoil Carey Price's season debut in a 3-0 victory over the Montreal Canadiens on Friday night.

Before the game, the Canadiens recognized Islanders great and Montreal native Mike Bossy with a tribute and moment of silence. Bossy died late Thursday at 65.

"It was a fitting place to be," Islanders forward Josh Bailey said. "We were certainly motivated to play well and try to get a win for him."

Price stopped 17 shots, giving up goals to Zach Parise and Noah Dobson in a 1:44 span in the third period. Brock Nelson added an empty-net goal.

"It was a lot of fun. It made me feel really, I guess, wanted," Price said. "It was definitely emotional but I was able to stifle that and stay focused because I wanted to play well tonight."

Canadiens part-owner Micheal Andlauer gave his season tickets to Price's family in order for them to be able to watch the goaltender up close.

"It didn't feel quite normal, but pretty close," Price said. "Definitely having my family here and being able to see them in warmups. They were able to sit by the Zamboni gate in the second period so that was a lot of fun for me."

Price played for the first time since Game 5 of the 2021 Stanley Cup Final in July. He spent months recovering from offseason knee surgery, but paused his rehabilitation after voluntarily entering the NHL's player assistance program last fall. He has said he entered the program for substance abuse and in January noted his career could be in jeopardy.

"It was almost ideal just to be able to take the game in without being swarmed at the start," Price said. "The guys played great tonight, I thought we deserved a better fate. I got to tip my hat to the guy at the other end."

Sorokin has 10 career shutouts. He tied the team record set by Chico Resch in 1975-76 and matched by Semyon Varlamov last season.

Corey Schueneman turned over the puck in the offensive zone, leading to Parise's goal. Matt Barzal set up the score at 4:25. Dobson then beat Price from the right faceoff circle at 6:09.

"The impact he had on the organization, I think there was definitely extra motivation for us to get the win regardless of how we did it," Parise said. "It wasn't the best game we played all year but we hung in there, had great goals and I think it was just really important for us to get a win on a day like today."

Islanders: At Toronto on Sunday night.