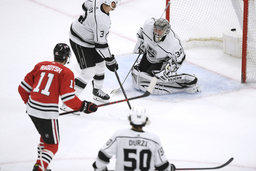 CHICAGO (AP) Blake Lizotte scored twice, Phillip Danault had a goal and an assist and the Los Angeles Kings snapped a three-game skid with a 5-2 victory over the Chicago Blackhawks on Tuesday night.

Taylor Raddysh and Patrick Kanes scored for the Blackhawks, who dropped their eighth straight game (0-6-2). Collin Delia made 31 saves.

The Blackhawks managed 20 shots on Quick, who yielded a goal on a one-timer from Raddysh stationed low in the right circle with 3:33 left in the second period, and a goal by Kane late in the third.

"We eliminated a lot of the errors we were making in games prior," Kings coach Todd McLellan said. "We limited shots. It gives us a little bit of confidence and gets us ready for tomorrow (Wednesday at Colorado). We know what we're up against there."

Lizotte picked up an empty-net goal with 1:36 to play.

Brown was back in the Kings' lineup after missing 14 games with an upper-body injury, and collected two assists.

Los Angeles, fighting with Vegas for one of the last wild-card spots in the Western Conference, dominated the first period, with Moore and Danault scoring on the Kings' first eight shots.

"I think you look at this game and it's a must-win game for us," Lizotte said. "The attitude was definitely urgent. We needed this one."

Moore took a feed from Danault low in the right circle without a Blackhawks defensemen within 10 feet and shoved the puck past a sliding Delia, who bit on Danault's fake, 7:43 into the game.

Danault made it 2-0 at 10:50, Delia made a save on his wrist shot only to see the puck bounce off Chicago defenseman Caleb Jones' right shin and into the net.

Spence added a goal on a slap shot 5:08 into the third period that hit Chicago defenseman Seth Jones, Caleb Jones' brother, in the knee and bounced past Delia.

Raddysh picked up an assist on Kane's goal, and Phillip Kurashev picked up assists on both Chicago goals.

"They played fast, hard," Raddysh said of the Kings. "They move the puck fast."

Chicago is threatening to finish the season the way it started. The Blackhawks lost their first nine games (0-7-2) before winning, a streak that contributed to the firing of coach Jeremy Colliton. This eight-game losing streak is their second-longest of the season. Their last win was at Los Angeles in a shootout on March 24.

"We've got some miserable guys in (the locker room)," Chicago interim coach Derek King said. "They feel it. They're not happy about it."

NOTES: The Kings are 4-4-2 in their last 10 games. This was the first time in that stretch they held a team to a single goal. . The injury-riddled Kings were without D Mikey Anderson, Sean Walker and Drew Doughty, the latter undergoing wrist surgery on Monday. He's been ruled out for the season. . The Blackhawks called up D Alec Regula from Rockford. He was in the lineup in place of Calvin DeHaan.

Kings: Finish a three-game trip at Colorado on Wednesday, then host Columbus on Sunday.

Blackhawks: Host San Jose on Thursday, then play five of their final eight games on the road.