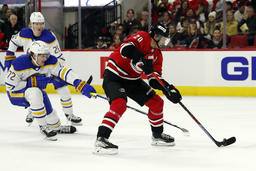 RALEIGH, N.C. (AP) The Carolina Hurricanes were happy to talk about playoff hockey after their latest accomplishment.

Sebastian Aho and Jordan Staal each scored two goals and the Hurricanes rallied from a pair of two-goal deficits to beat the Buffalo Sabres 5-3 and clinch a playoff berth Thursday night.

"That's what we need coming down the stretch (and) in the playoffs, too," Aho said of the ability to raise their performance level.

This marks the fourth season in a row that Carolina will be in the postseason. That's the longest string since the franchise relocated from Hartford, Connecticut, to North Carolina.

"Isn't that cool?" rookie forward Seth Jarvis said of the chance to be in the Stanley Cup playoffs.

Now, core members of the team are becoming playoff veterans.

"That's the whole point why you play hockey - to be in the playoffs," Aho said. "We are very proud that we're heading to the playoffs."

Aho's go-ahead goal came with 8:21 remaining, propelling the Hurricanes to the 100-point mark (46-17-8) for the just the second time in franchise history. They have 11 games remaining.

"It's a huge accomplishment. We grinded all year," coach Rod Brind'Amour said. "Obviously, we know there are bigger and better things we want to accomplish, but you have to get there first. To get there with 11 games to go says a lot about the group. Normally, you're sweating it out to try to get in."

The Hurricanes snapped a two-game losing streak with their biggest scoring output in five games. The reward was the playoff berth.

"It's good news for this club," said Staal, the team captain. "We worked hard to get here. We've got a long road ahead, but this was the first step."

Teuvo Teravainen also scored for the Hurricanes, while Staal's second goal was an empty-netter with 54.3 seconds to play. Andrei Svechnikov delivered passes on both of Aho's goals and Jarvis also was credited with two assists. Antti Raanta stopped 18 for his first victory since March 26.

The Sabres were in their first game since they were officially eliminated from playoff contention while idle Wednesday night, stretching their postseason drought to an NHL-record 11 seasons.

"A couple little sloppy mistakes by us and they capitalize on that," Skinner said of the change in momentum.

Staal tied the game at 5:12 of the third period to start a three-goal period for Carolina.

"To have a third period like, that's big for our confidence," Jarvis said.

Skinner's back-handed pass from along the boards found Thompson in ideal position heading toward the net for a 1-0 lead 3:49 into the game. Buffalo struck again less than three minutes later with Skinner feeding Tuch right in front of the net.

That gave the Sabres two goals on their first two shots of the game. They were outshot 12-6 in the first period.

Yet it was trending toward a good formula for some road success.

"It's a game our guys can actually learn from," Sabres coach Don Granato said. "It otherwise was frustrating because we were right there. It was a winnable game."

The Hurricanes took their turn with a nifty goal when Aho converted off Svechnikov's pass.

That didn't result in momentum because the Sabres had another goal 30 seconds later, with Olofsson taking Casey Mittelstadt's pass in front of the net and beating Raanta.

Teravainen's unassisted goal late in the second period pulled Carolina within one.

This was a rematch of Buffalo's 4-2 win Tuesday night at home.

The top goal scorers for both teams found the net. Aho has 33 goals after his seventh two-goal game of the season. It was his first multi-goal outing since Feb. 10 at Boston. Thompson notched his 32nd goal of the season, increasing his career-high total. His assist pushed his team-best points total to 57.

Just three nights after playing in the NCAA men's basketball championship game, Brady Manek of North Carolina cranked the siren as the Hurricanes took the ice prior to the game. The team often has celebrity guests handle that honor. North Carolina beat rival Duke in the Final Four semifinals before falling to Kansas in Monday night's title game in New Orleans.

Sabres: At Florida on Friday night.