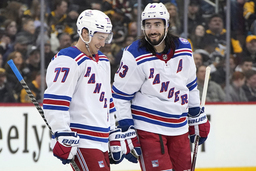 PITTSBURGH (AP) The New York Rangers and Pittsburgh Penguins know where they are in the standings. They know a first-round playoff matchup seems almost inevitable.

In some ways, it feels as though it's already started. And the Rangers, at the moment, appear to have the upper hand.

Frank Vatrano and Braden Schneider scored less than five minutes apart in the second period, Chris Kreider added his 45th goal in the third and the Rangers moved into second place in the Metropolitan Division with a 3-2 win over Pittsburgh on Tuesday night.

Igor Shesterskin made 22 saves, including a stop on Penguins forward Jake Guentzel in the final seconds to help New York beat Pittsburgh for the second time in five days, dropping the Penguins from second to third in the division.

"It was an intense game, but all the games are at this time of the year with where our team is in the standings," Kreider said. "The level of intensity is ramped up every single game as we get to the end here."

Five days after getting drilled at Madison Square Garden in a 5-1 loss, Pittsburgh responded with a far better effort but ultimately the same result.

Sidney Crosby scored his 25th goal and Brian Boyle got his ninth for the Penguins. Tristan Jarry stopped 23 shots but fell to 6-2 in his last eight starts, with both losses coming to New York.

"This is the type of hockey we've got to become accustomed to playing down the stretch," Pittsburgh coach Mike Sullivan said. "It had a playoff feel to it."

Last week New York overwhelmed Pittsburgh with a furious start. This time the Rangers put the clamps on Crosby, Evgeni Malkin and Co. early and relied on the resilience that's defined them. The victory marked New York's 23rd comeback win, a franchise record and most in the NHL this season.

"I think the easiest way to defend is by playing offense, make the defensemen turn and try to force them into turnovers (and) playing in their end," Kreider said.

The open space and fortuitous bounces that came aplenty while lighting up Detroit for 11 goals - Pittsburgh's highest single-game total since 1993 - on Sunday vanished against the Rangers.

Still, the Penguins managed to take the lead 14:24 into the first when Boyle deflected a shot by defenseman Brian Dumoulin that found its way past Shesterkin.

Pittsburgh maintained the advantage despite putting on sporadic pressure against Shesterkin well into the second period before a shaky clearing attempt by Dumoulin found its way to the stick of Mika Zibanejad, who quickly fed it to Vatrano in the slot. Vatrano's quick shot 13:32 into the second gave him 15 goals on the season, five since joining New York at the trade deadline.

Less than five minutes later, the Rangers went in front when Schneider jumped into the play, raced down the slot and hammered home a pass from Artemi Panarin to make it 2-1.

Kreider pushed New York's advantage to two when he made his way to the front of the net and jammed in a rebound on the power play 1:06 into the third.

Crosby extended his home point streak to 13 games and moved into 23rd place by himself on the NHL's career scoring list with a power-play goal of his own just past the midway point of the third. But the Penguins could not pull even.

"When we executed, we had momentum," Boyle said. "When we didn't, they had momentum, they got chances. ... We've got another level to get to."

The Penguins honored recently retired Pittsburgh Steelers quarterback Ben Roethlisberger by wearing No. 7 jerseys during warmups and letting him drop a ceremonial first puck. Roethlisberger, who called it a career in January after 18 seasons and two Super Bowl wins, watched from the owner's box alongside Hall of Famer Mario Lemieux.

NOTES: Crosby has 1,395 career points, moving him ahead of Hall of Famer Luc Robitaille. ... Malkin assisted on Crosby's goal, giving him 697 in his career, most for a Russian-born NHL player. ... The Rangers, who have the NHL's second-ranked power play, went 1 for 1 with the man advantage and have scored on the power play in seven of their last 10 games.

Penguins: Begin a two-game road trip Thursday when they travel to Minnesota.