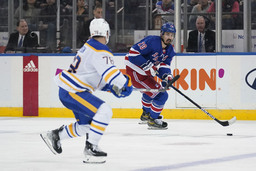 Frank Vatrano had two goals, Alexis Lafreniere had a goal and an assist and Artemi Panarin also scored to help the Rangers win for the fifth time in their last six at home. New York is 9-2-1 in its last 12 at Madison Square Garden. Andrew Copp had two assists and Alexandar Georgiev had 13 saves to improve to 10-9-2 on the season.

The Rangers rallied for their league-best 22nd comeback win this season.

"You're going to have those games, up and down battles," Miller said. "It shows how deep our team is and what we can bring every night."

Rasmus Asplund, Will Butcher, Kyle Okposo and Jeff Skinner scored for Buffalo, which is 3-0-2 in its last five. Craig Anderson finished with 26 saves.

In the extra period, Copp stole the puck at center ice, brought it up and passed to Lafreniere on the right side. Lafreniere passed it back across to a Miller, who beat Anderson inside the left post for his sixth of the season. Copp, acquired from Winnipeg last Monday, has five points in three games with the Rangers.

"Laffy found me walking down Main Street,? Miller said about his overtime heroics, which allowed the Rangers to stay one point behind Pittsburgh for second place in the Metropolitan Division.

New York has won its last five against Buffalo and is 9-0-1 in the last 10 meetings. In 20 matchups dating back to Feb. 2, 2017, the Rangers are 16-3-1 against the Sabres. The Rangers also completed a three-game sweep of the season series against the Sabres and denied Buffalo its first three-game road winning streak since November 2018.

"They stayed in it," Rangers coach Gerard Gallant said of the pesky Sabres. "We found a way I guess."

The Sabres reached overtime for the fifth straight game, accomplishing the feat for the first time since November 2010.

"I like how our guys responded but we let it slip away late," Sabres coach Don Granato said. "We got a point out of it but we had to push through in a tough building. They battled and fought all night long."

Panarin put the Rangers ahead 4-3 early in the third, getting the rebound of a shot by Jacob Trouba that was stopped by Anderson and scoring his 17th at 3:52. Panarin leads the Rangers with 75 points and has the most points this season at home with 36 - six goals and 30 assists.

Skinner tied it on the power-play with 6:53 remaining with his 27th of the season.

Vatrano, acquired from Florida on March 16, opened the scoring 3:59 into the game, taking a pass from Chris Kreider before firing the puck past Anderson.

Vatrano then added a near carbon-copy goal at 4:17 after taking advantage of a Sabres turnover and beating Anderson for his 14th of the season and fourth as a Ranger.

Vatrano has goals in three of his last four games, including three goals in the past two. He has been effective on right wing on the Rangers' top line centered by Mika Zibanejad with Kreider on the left.

"We got off to a great start tonight, using our speed and keeping it simple," Vatrano said.

Asplund narrowed the deficit to 2-1 with 1:48 left in the first, scoring his sixth of the season.

Buffalo tied it at 2:06 of the second when Butcher's shot cleanly beat Georgiev for his second goal of the season. Okposo then put the Sabres ahead 3-2 with his 16th at 6:48 of the middle period.

"It says a lot about our group, down 2-0 five minutes into the game in a loud building," Okposo said. "We did a really good job of calming down and settling into our game. We took a 3-2 lead and then it was a game from there."

Lafreniere then tied it for the Rangers at 11:46 of the second with his 15th goal, extending his points streak to six games.

Rangers: At Pittsburgh on Tuesday night.

Sabres: At Chicago on Monday night.