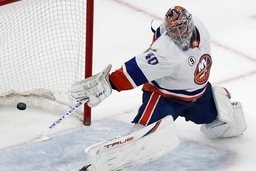 BOSTON (AP) David Pastrnak and Brad Marchand each had a goal and an assist during a four-goal second period for the surging Bruins, carrying them to a 6-3 victory over the New York Islanders on Saturday.

Boston captain Patrice Bergeron played in his 1,200th game. He became the 120th player in NHL history to reach that milestone. He returned to the lineup Saturday after missing the previous four games with an elbow infection.

"I told him we need you around for 1,300, by the way, and beyond," Boston coach Bruce Cassidy said of the 36-year-old Bergeron, who can become a free agent at the end of the season.

"Credit to him to play for one organization that long," Cassidy said. "Obviously, that tells you a little bit about both sides. He loves it here and we love having him."

Erik Haula and Jake DeBrusk each had a second-period goal after Craig Smith and Taylor Hall scored in the first for Boston, which earned its 14th win in 17 games (14-2-1).

"I guess I've been around for a while. It's been a long road that went fast," Bergeron said. "It's kind of crazy to think. ... You appreciate the moment and be thankful for everything you go through."

Linus Ullmark made 24 saves for Boston.

Brock Nelson scored his 30th of the season, and Anders Lee and Zach Parise each had a power-play score for the Islanders, who had won four of their previous five. Semyon Varlamov stopped 38 shots for New York.

Leading 2-1, the Bruins scored twice in the opening four minutes of the second. Pastrnak tallied his team-leading 37th when he charged in for a rebound at 2:13.

Just 1:43 later, Marchand hustled to his skates after being knocked down in the corner, collected a loose puck at the bottom of the right circle and slipped a wrister by Varlamov to make it 4-1.

Play got chippy after Boston opened its three-goal lead.

Pastrnak set up Haula's goal with a perfect cross-ice feed that made it 5-2 late in the second. DeBrusk closed the scoring in the second when his pass from behind the net caromed in off a skate.

"I think every night we expect to win; it doesn't matter who we're playing, where we're playing," Hall said. "It's a really fun feeling to have. Every line's contributing, you see a lot of balance."

Smith gave Boston a 1-0 edge 4:03 into the game when he scored off the rebound of Brandon Carlo's shot that caromed from the back boards.

"It felt like they were in our face up ice. We weren't very clean through the neutral zone," Parise said. "Just not as smooth as it had been."

Hall tipped Charlie McAvoy's shot past Varlamov for a power-play goal at 19:26, but Nelson swatted a rebound in with a backhand 22 seconds later.

"We weren't able to come and roll with that and tie it up," Nelson said of his late goal.

"It's special, especially being an Original Six team," Bergeron said. "A storied franchise and being around and having a chance to meet those guys - Bucyk, Bourque and (Bobby) Orr and all the greats. It's an honor and something I don't take lightly."

The Islanders had a goal wiped out by a video review. Kyle Palmieri, positioned in the slot, clearly redirected a shot with a high stick midway into the opening period.

Boston improved to 9-1 in afternoon games.

NOTES: Boston defenseman Mike Reilly was a healthy scratch for the second straight game after the club acquired defenseman Hampus Lindholm in a trade-deadline deal from Anaheim. ... Boston defenseman Josh Brown, also acquired at the deadline from Ottawa, was a healthy scratch. He hasn't played yet. ... On Thursday, the Islanders announced that forward Cal Clutterbuck had shoulder surgery that will sideline him the rest of the season and defenseman Scott Mayfield will miss 4 to 6 weeks with a lower-body injury. ... New York won the first two meetings this season.