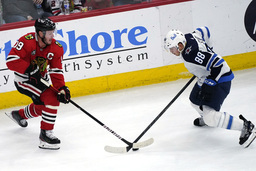 Jonathan Toews, Dylan Strome, Taylor Raddysh and Philipp Kurashev each scored for Chicago. Patrick Kane set up the goals for Strome and Raddysh.

Chicago led 2-1 when Harkins tipped Dylan DeMelo's drive from the right point and beat goaltender Marc-Andre Fleury, the subject of trade rumors less than 24 hours before the deadline. It was the first of four Winnipeg goals on eight shots in the last 17 minutes of the second period.

Harkins added his second goal from the doorstep on a perfect pass from Copp at 11:13, while Connor and Morrissey, the latter on a power play, scored from the slot two minutes apart late in the second period.

"Copper had a great backdoor look to me," said Harkins, put on Copp's line for the game. "I think we were kind of jelling as the game went on. I was just trying to get to the net and use my shot, and it paid off."

Fleury, who lost his glove just before Connor's goal, slammed his stick against the boards going to the bench at the end of the period.

"I put in a lot of work, so when results come, I'm not surprised," Connor said of his career-high 39th tally. "On to the next one."

Ehlers opened the scoring with a wraparound goal that deflected off Fleury's skate 9:14 into the game.

Toews tied it on a deflection of Raddysh's pass from the right corner 1:13 into the second period. The Blackhawks took the lead on Strome's goal into an open net after Kane corralled the puck and waited for goaltender Connor Hellebuyck to commit before passing to Strome.

"I thought I'd have to take somebody out of the net after the first, but no," King said.

"The rest of the way, this is on us," King said. "We have to compete and play the right way for three periods. We didn't do that tonight. We cheated it and it cost us."

Raddysh and Kurashev beat Hellebuyck on wrist shots in the third period, but Chicago's rally fell short. Hellebuyck made a key stop on Raddysh from 18 feet with 1:47 to play. Wheeler scored into an empty net 38 seconds later.

"We let them back in the game," Jets interim coach Dave Lowry said. "Found a way to hold on."

NOTES: Winnipeg must jump over Vegas and Vancouver before matching Dallas in points to tie for the last playoff spot. ... It took 117 games for Harkins to register his first multi-goal game. The two goals were the ninth and 10th of his career. ... The Jets brought up LW Jeff Malott from Manitoba of the AHL for his first NHL game. ... Chicago rookie D Alex Vlasic, who broke into the NHL on Saturday, was paired with Riley Stillman on the third pair, rather than Alex Jones, his partner in his debut.

Chicago starts a three-game trip Wednesday in Anaheim, followed by games at Los Angeles and Vegas.