Caulfield scores in OT to lift Canadiens past Flyers, 4-3 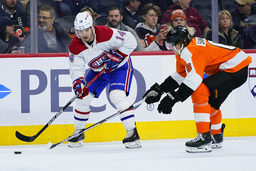 PHILADELPHIA (AP) Cole Caufield scored 2:10 into overtime to give the Montreal Canadiens a 4-3 comeback victory over the Philadelphia Flyers on Sunday night in a matchup of last-place clubs.

Rem Pitlick tied it for Montreal with 42.1 seconds left in regulation with a short-handed goal. Montreal snapped a two-game losing streak to improve to 8-6 under interim coach Martin St. Louis.

"We were a little sluggish at the start but definitely earned that win," said Montreal's Nick Suzuki, who scored twice.

Caulfield won it by streaking into the offensive zone and firing a slap shot from the top of the circle that beat goalie Carter Hart. Pitlick assisted on the goal.

Claude Giroux scored for Philadelphia to reach 900 career points. Cam Atkinson and Kevin Hayes also scored. The Flyers have lost three in a row and 24 of 29.

"We're going to have to keep finding ways to get players to understand you can play the way you want to play or you can play winning hockey," Flyers interim coach Mike Yeo said.

Pitlick forced overtime. Ben Chiarot passed to the front of the net from the wall, and Pitlick buried it for his 12th of the season. The Canadiens actually were skating 5-on-5 during the tally after pulling their goalie.

Giroux passed Hall of Famer Eric Lindros for eighth-place on the club's goals list with his 291st of his career.

Canadiens: LW Artturi Lehkonen, who entered second on the club with 28 points, was out of the lineup due to an upper body injury. . D Joel Edmundson didn't play the second half of a back to back after being sidelined by a back injury until making his season debut in Saturday night's 4-3 home shootout loss to Seattle.

Flyers: C Scott Laughton didn't play for the second straight game after crashing headfirst into the boards in the second period of Thursday's loss at Florida. Interim coach Mike Yeo said there is no timetable for his return. ... Farabee took a hard hit from Wideman with a minute left. Wideman was assessed an interference penalty.