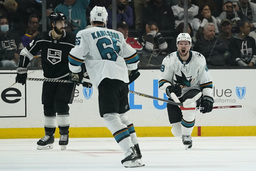 Brent Burns and Nick Bonino each scored on the power play, Alexander Barbanov had a goal and an assist, and the Sharks ended a three-game skid.

Sawchenko, who was 0-1-1 through his first five NHL appearances, bounced back after struggling in the first period.

"He rebounded and found a way to settle himself down and make some saves when he needed to, so I thought he played real solid in the second and third period," San Jose coach Bob Boughner said.

Trevor Moore had a goal and two assists, Andreas Athanasiou and Phillip Danault each had a goal and an assist, and the Kings had a three-game winning streak broken as top defensemen Drew Doughty and Mikey Anderson and forward Viktor Arvidsson were not available because of injuries. Jonathan Quick allowed four goals on 30 shots.

"Six minors, when's the last time we took six minors? Four in the offensive zone," Los Angeles coach Todd McLellan said. "We played right into their hands. Their special teams are very good, and so it was not a good night for us."

Hertl scored on a wraparound, getting his 23rd goal after Quick overcommitted at the near post.

"It's so nice because lately, the chances, I couldn't bury them and help the team," Hertl said. "This one, in overtime, for sure felt really nice, and hopefully I can get a little more going."

Barbanov redirected Erik Karlsson's pass in to tie it at 3 1:21 into the third period, one of two assists for the defenseman in his first game back since undergoing surgery to repair a torn muscle in his left arm on Jan. 24.

"I think when we do the things that we're good at, we're a good team just like any other team in this league," Karlsson said. "The margins are not as big as people think. I just think that we have a little bit of learning to do in how to keep it on a consistent level a little bit more often."

Moore made it 3-1 midway through the second period, scoring shorthanded on a wrist shot from the slot for his 11th goal of the season. It was his second career game with at least three points after getting a goal and three assists against Philadelphia on Jan. 1.

Bonino cut it to 3-2 as the power play was about to expire, reaching around Quick to slap in a bouncing rebound.

The Sharks were 2 for 6 on the power play, while the Kings failed to convert on any of their four chances.

"It's a good point considering how sloppily we played," McLellan said. "It's a point on a night where we probably didn't deserve a point, so let's move on. Let's fix a few things, a lot of things, and get ready to play again."

Doughty didn't play because of an undisclosed injury and is day to day, McLellan said, while his partner Anderson is on injured reserve retroactive to Monday because of an upper-body injury. Anderson, Arvidsson and fourth-line agitator Brendan Lemieux are all week-to-week, with the forwards dealing with lower-body ailments.

Athanasiou has three goals and an assist in two games since replacing Arvidsson on the second line with Danault and Moore.

"They have have so much tenacity and hunt in their game, and yet they're responsible defensively, so that makes it fairly easy for an individual to go in there and play," McLellan said of Danault and Moore. "If I'm sitting on the bench, I want to be on that line right now."