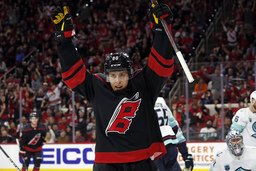 RALEIGH, N.C. (AP) As Martin Necas skated back toward the Carolina Hurricanes bench, he mockingly brushed something off his back.

This slump had ended.

"It was just the feeling at the moment," he said of his reaction.

Necas scored with 9:38 remaining to give the Hurricanes their first lead of the game in a 3-2 win over the Seattle Kraken on Sunday night.

"I was trying to not count the games I haven't scored," Necas said. "Through my career, I never really waited that long for a goal."

Necas had gone 18 games without a goal, last scoring Jan. 15. He found the puck as it bounced near a cluster of players, falling away from the crease as he fired a shot for his ninth goal of the season.

By ending the longest scoring drought of an NHL career that has spanned parts of five seasons, he's now tied for the team lead with five game-winning goals.

"If you're going to come out of it, that's the kind of goal you want to get," Carolina coach Rod Brind'Amour said.

Nino Niederreiter and Tevuo Teravainen scored second-period goals on power plays for the Hurricanes, who stretched their home-ice points streak to 11 games. Antti Raanta made 28 saves.

The Necas goal was the biggest because of who scored it.

"We need everybody scoring and feeling good," Teravainen said.

Alex Wennberg and Calle Jarnkrok scored for Seattle, which has lost on back-to-back nights to begin a five-game road trip. Phillipp Grubauer stopped 30 shots, but lost his eighth straight (0-7-1).

"There's a lot of good things, but we don't get the results we want," Wennberg said. "I felt like we had momentum in the game and we were pushing."

It took the Kraken just 66 seconds after that to go back ahead when Jarnkrok took advantage of a Carolina turnover and converted it into his second goal in the last three games.

Teravainen tied the score with 2:38 remaining in the second period, just four seconds into a power play.

Seattle has allowed a goal on four of its past five penalty-killing situations across two games.

"We've got to win the special teams battles," Wennberg said. "It just came down to that."

Still, Seattle managed only nine shots in the third period.

"When we got the lead, I think we played pretty smart," Raanta said.

Terravainen, a left wing, appeared in his 500th NHL game, with the last 385 with Carolina.

Meanwhile for the Kraken, defenseman Mark Giordano was fresh off a milestone, perhaps embarking on another. He was on the ice again a night after playing in his 1,000th game in Washington.

Frederik Andersen, who's Carolina's top goalie, was a scratch with what has been described as a day-to-day ailment. Alex Lyon was recalled from the American Hockey League and served as the backup.

Andersen has been in the nets only once in a four-game period, marking the first time this season he has been that inactive across a stretch that long. He entered March with an NHL-leading win total and now holds a 29-8-2 record.

Raanta appeared in consecutive games for just the third time this season.

Kraken: At Toronto on Tuesday night.