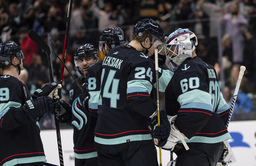 SEATTLE (AP) Colin Blackwell scored the go-ahead, short-handed goal in the third period and the Seattle Kraken snapped a seven-game losing streak with a 4-3 victory against the Nashville Predators on Wednesday night.

Blackwell's goal came a little more than three minutes into the third, and was the first short-handed tally of his career.

Blackwell started his NHL career with the Predators, making his debut for the team in 2018 and playing 33 games for Nashville over two seasons.

"That one felt good. A team I used to play for, those ones always feel good," Blackwell said. "That one definitely sticks out there for this year."

Blackwell also had an assist during a second-period scoring binge for the Kraken as Alex Wennberg, Calle Jarnkrok and Yanni Gourde had goals in a span of 2 minutes, 39 seconds. It was the fastest three-goal span for the first-year franchise.

"It's a great feeling, obviously," Wennberg said. "And it was great, too - it's three different lines that go in and score. So that's good for the team as well, you have everyone chipping in and doing their part."

Chris Driedger had 19 saves for his fifth win for Seattle, which won for the first time since Feb. 11 at Anaheim. But the Kraken trailed 2-0 before their big second period.

After a relatively quiet first period during which Nashville took a 1-0 lead, the second featured a flurry of offense from both teams.

Nashville took a 2-0 lead with 13:06 to go in the second period on a power-play goal by Duchene.

It took only 29 seconds for Seattle to answer. On a rush up ice, Marcus Johansson's cross-ice pass gave Wennberg an easy score.

Just a minute and a half later, Jarnkrok tied the game at 2 as Jordan Eberle's pass from just behind the net found Jarnkrok at the top of the crease.

It took one more minute for the Kraken to take their first lead of the game as Gourde flipped it in on another rush up ice after a nice assist from Blackwell.

Duchene tied it with about 5 1/2 minutes left in the period with his second goal, a shot on an open net as Driedger was caught out of position.

The Predators opened the scoring with 6:47 left in the first. Michael McCarron's pass from behind the net found Tomasino at the top of the crease for a 1-0 lead.

"To be honest, I don't think we deserved to win really tonight," Josi said. "I thought our first (period) was OK, was pretty even. But the second, they had a long push, obviously scored those three goals, and then we had a push toward the end. But our third period just wasn't good enough."

NOTES: Josi reached 500 points in 732 games, the fifth-fastest defenseman in the last 25 years. He's also the fifth defenseman from the 2008 draft to reach the mark, the most of any draft class in history. ... The Predators reassigned D Matt Tennyson to Milwaukee of the American Hockey League on Tuesday. ... Jarnkrok is the fourth Seattle player to score against the team he was selected from in the Kraken's expansion draft.

The Kraken have scored three short-handed goals in the last five games, and killed off 18 of the last 20 penalties faced. "We kind of switched it up recently to be very aggressive. I think we've been doing a good job of that," Blackwell said. "Any time you can frustrate their top guys and put a lot of pressure on them and make it hard on them, it's very beneficial for us and makes a long night for them."

The Kraken invited Ukrainian-born singer Roman Vashchuk to sing his country's national anthem before the game. The team also announced the One Roof Foundation - the philanthropic arm of the Kraken and Climate Pledge Arena - was donating a portion of the night's proceeds to USA for UNHCR, the UN Refugee Agency, which is supporting the people of Ukraine.

Seattle: Travels to play the Capitals on Saturday.