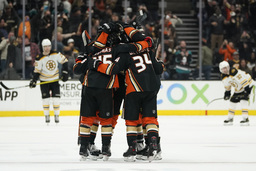 ANAHEIM, Calif. (AP) Trevor Zegras scored a power-play goal with 21.6 seconds remaining to give the Anaheim Ducks a 4-3 win over the Boston Bruins on Tuesday night.

Rickard Rakell, Isac Lundestrom and Adam Henrique scored in the first period, and John Gibson made 31 saves for the Ducks, who had lost their last two games and five of the past seven in regulation.

"I think our power play was going pretty good tonight," said Zegras, who also had an assist. "First one, we scored. Second one, we were in their zone it seemed like five minutes. And third one, obviously, we scored late."

Nick Foligno and Brandon Carlo each had a goal and an assist for the Bruins, who had their five-game winning streak halted. David Pastrnak also scored, and Linus Ullmark allowed four goals on 28 shots.

"Disappointing finish, obviously, but we did at least get our game," coach Bruce Cassidy said. "But the positive of this is we found a way to get back in the game. Some of these games have gone 6, 7-1 against us this year."

Zegras won it on a wrist shot from the left circle after Charlie McAvoy had been called for hooking. Zegras praised Sonny Milano for setting a crucial screen on his 14th goal of the season, the fourth on the power play.

"He has been unbelievable net front this year in terms of winning puck battles, tipping pucks. I mean, that's the only reason why I scored was his screen," Zegras said. "Ullmark, I don't think he even saw it. Sonny was kind of standing right in front of him so, I mean, I got to give all the credit to him there."

Despite giving back a two-goal lead after striking twice in the final 2:07 of the first period to go up 3-1, Ducks captain Ryan Getzlaf liked the composure his teammates showed.

"I thought we did a pretty good job of just staying level-headed throughout the whole game. Even at the end there, I thought we were pushing for a goal," said Getzlaf, who had three assists. "I think the mentality coming into the game was a lot better, a lot healthier from what you need at this time of the year."

Cassidy was disappointed with the letdown late in the first, starting when Lundestrom pounced on a Cam Fowler rebound after a swarming forecheck created a turnover, which Henrique followed up by finishing off an odd-man rush with 56.7 left.

"It looked like we were gonna get through it even though we weren't at our best. And then we just had some bad breakdowns. We just didn't manage pucks, didn't protect the front of our net. All of a sudden, it's 3-1," Cassidy said.

The Bruins had allowed just one goal in the first period during their previous five games and had never trailed after 20 minutes in that span.

They showed plenty of fight after that, with Carlo cut it to 3-2 with 8:45 left in the second when Gibson couldn't handle his shot from the blue line through traffic and it trickled in.

Pastrnak tied it 3-all 1:52 into the third period when his one-timer deflected off both Anaheim defenseman Brendan Guhle and center Sam Carrick, and it looked like it was going to be enough to salvage at least one point before Zegras' heroics.

"I remember being that age and you score big goals like that, those are things that you remember down the way," Getzlaf said. "It's great for his energy level and what he does to our group when he sparks it like that."

Zegras is up to 41 points in his electrifying rookie season, and Getzlaf has been working to make sure the next face of the franchise knows what it takes to succeed when opponents are focused on stopping him.

"Nobody in this league is ever gonna give you anything for nothing. And the more he plays, the more he does things like that, the more attention he's gonna get," Getzlaf said. "When other teams are worried about what you're doing, that's a big thing."

Bruins: At Vegas on Thursday night.